History informs us that what we see going on in the current primaries to elect candidates for the presidential election later this year is a manifestation of our national state of crisis. History teaches us that at such points of crisis shared civic consensus fragments under the influence of reemerging tribal instincts. Tribalism is the stage of human social organization that most closely equates to herd mentality. Leadership in this context either calms or inflames the collective fight-flight instinct, the primary instinct that distinguishes us from them.

Between the states of fight or flight, between hope and fear lies a complex mental state called ambivalence.

There are moments when I find everything within me rising in hope and I cry out: save me, save us -hosanna! Then in the next moment the impossibility of my hopeful exultation crashes under the weight of a defensive cynical realism, quietly giving voice to my fears and whispering: crucify him!

Palm Sunday disturbs me by the contradiction of one moment blessing palms and singing Ride on, ride on in majesty before minutes later, hearing a crescendo cry of crucify him, crucify him.

In 160BC after seven years of guerilla resistance, Judas Maccabeus led the triumphant Jewish Resistance back into a Jerusalem newly liberated from the yoke of the Seleucid Emperor, Antiochus Epiphanies. The Jewish forces carried blessed palm branches with which to begin the cleansing of the Temple; a Temple that had been defiled by the image that Antiochus Epiphanies had placed of himself in the Holy of Holies. The Maccabean Revolt was the last time the Jews could point to a successful assertion of their independence from foreign domination.

I find drawing a connection between the Maccabean cleansing of the Temple and Jesus being welcomed by the crowds bearing branches cut from the trees gives an insight into the hopes and aspirations of the crowd that welcomed him into the city. They saw in Jesus a liberator, a new son of David, a re-embodiment of Judas Maccabeus – one who would liberate them from the foreign Roman domination, and cleanse the Temple of defilement at the hands of its collaborationist, religious caste. Jesus could have inflamed Jewish tribalsim. Instead he chose a different path.

We know the end of the story. We know that as the events of Holy Week unfold, things didn’t go in the direction of fulfilling public hopes and expectations.  Hopes turn to disappointment that fans an angry disillusionment. Ambivalence is too hard to tolerate. So the crowd turns on Jesus, seeking a sacpegoat to blame.

I began with a reference to our current political process in which we see clear signs of politicians playing upon our tribal fears. The profound disillusionment of the crowd at large, and of Jesus’ own inner circle, in particular; a disillusionment that Judas eventually gives voice to, plays well in our current experience of the world. Many people today are struggling with the loss of hope as we feel control over our lives and our futures slipping from our grasp. They have become afraid and thus vulnerable to the resurgence of a collective admiration of brute strength, and a willingness to find scapegoats to provide the illusion of easy answers to complex problems.

We approach Holy Week and the great three days of Easter caught in an ambivalence between our worldly and spiritual contexts. We can approach the spiritual context from a ringside seat, viewing it as a great epic drama of events set in a time, long ago. We can travel through the events of Holy Week and Easter as if they are consecutive performances of a Shakespeare history play or the demanding three days of Wagner’s Ring Cycle. We emerge from the experience moved, disturbed, elated, saying to one another: gee that was powerful!  However, is being a spectator really satisfying?

I keep reminding my community that Episcopalians are liturgical people. Liturgy is commonly misunderstood as a spectacle to watch. This could not be further from the truth. Liturgy requires our participation. The word liturgy means the work of the people of God. Liturgy is not a play we watch. It is a drama in which we join the action as fellow participants with Christ. Liturgy demands that we lend a hand to that work of the people of God. We do so through being present. Through liturgy the I becomes the we.

There are two ways to change the world. The first is to engage in concerted action, following a political or social agenda. The second is to become changed from within, to become the change we seek to bring about. Through our participation in the great liturgies of Holy Week and the great three days of Easter, we participate in the cosmic triumph of love over fear. We contine to be transformed as Sunday-by-Sunday we participate in the work of God’s people by being present in the liturgy. 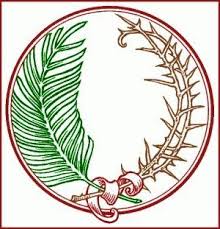 On Palm Sunday, I see myself in the crowd crying both hosanna and crucify him. I am full of hope and longing for my world to be transformed beyond the maintenance of the status quo, the endless repetition of business as usual. Yet, my very hope and longing also terrify me. So often it’s safer to resist the change I most long for in order to protect myself from my fear. Can it really be true that sacrificial love can change the world? Can it really be true that sacrificial love is enough to confront the misuse of power through the threat or actuality of violence? Alone, I am not so sure. But, what about as a member of a community?

Through liturgy and this is especially true of the great liturgies of Holy Week and Easter the I becomes we. My fear of what an allegiance to self-sacrificial love might cost me, what following Jesus to the other side of the Cross might demand of me becomes manageable when I join with others and together we participate as members of a cross-bearing and love-affirming community. This is the message our current nation and world needs so urgently to hear.