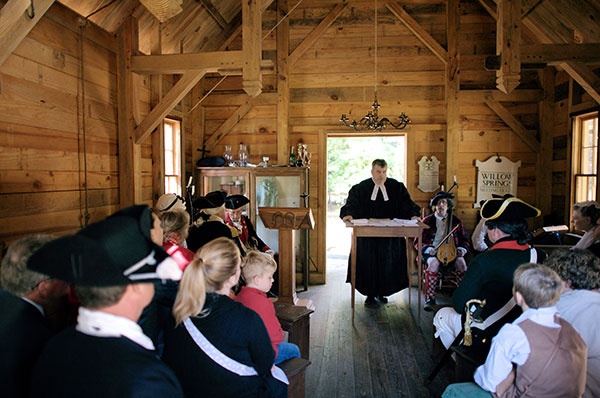 Recently, some of us attended a seminar on how to prepare for a mass shooter event. Our St Martin’s takeaway from this session is the realization that we must develop a clear protocol of steps, documented on cards publically displayed, that instruct our vergers and others in leadership on the steps to follow in the event of such an emergency.

On Thursday, I met clergy colleagues from the Central Deanery at our monthly lunch and I learned that in some parishes the takeaway from this seminar was a reinforced belief that parishioners must now come to church armed. All the priests around the table were of a common mind concerning carrying guns in church. We all believed and continue to believe that unless you are a member of the police, i.e. those charged with an official duty of care to protect the public, the bearing of arms in church begs significant theological questions. We also recognized that the protection of gun free spaces continues the age-old understanding of the church as a sanctuary space – a place of safety free from the creeping paramilitarization of our civic life.

The current gun debate and the more controversial discussion about guns in schools and churches seems only to further generate copious heat but little light. The failure to make sensible traction in this debate is a failure to confront the enemy within that confounds all sides in an attempted conversation, namely fear. Fear, as in a state of pervasive fear-fullness has extended an icy grip upon our hearts. Fearful hearts feed a culture of communal paranoia in which everyone becomes afraid. But the question never asked is – Of what are we afraid? What lies at the source of our fear? 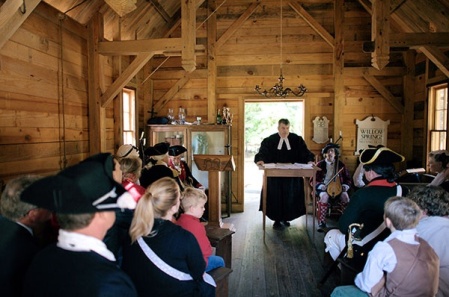 “The earliest mandatory gun carrying law is a 1619 Virginia statute that required everyone to attend church on the Sabbath, “and all suche as beare armes shall bring their pieces, swords, pouder and shotte.” Those failing to bring their guns were subject to a three shilling fine.lxi This law was restated in 1632 as: “All men that are fittinge to beare arms, shall bring their pieces to the church….”lxii While the original motivation in colonies both North and South for bringing guns to church was fear of Indian attack, by the eighteenth century, the Southern colonies‟ concerns appear to have shifted to fear of slave rebellion. Virginia‟s 1619 and 1632 statutes were somewhat vague as whether all white men were required to come armed to church or not, because of the qualification “fittinge to beare arms.” The requirement was more clearly restated in a November 1738 statute that required all militiamen to come to church armed, if requested by the county‟s militia commander. Other language in the statute suggests that protection of the white inhabitants from possible slave uprising was now the principal concern.lxiii

Rhode Island‟s 1639 law ordered that, “none shall come to any public Meeting without his weapon.” There was a fine of five shillings for failing to be armed at public meetings.liv Maryland did likewise in 1642: “Noe man able to bear arms to goe to church or Chappell… without fixed gunn and 1 Charge at least of powder and Shott.”lv The Rhode Island town of Portsmouth passed a similar requirement in 1643,lvi as did New Haven Colony in 1644.lvii

In 1637 Massachusetts, Anne Hutchinson‟s Antinomian heresy threatened the social order. Hutchinson‟s beliefs had spread rapidly through Puritan society, and “some persons being so hot headed for maintaining of these sinfull opinions, that they feared breach of peace, even among the Members of the superiour Court… those in place of government caused certain persons to be disarmed in the severall Townes, as in the Towne of Boston, to the number of 58, in the Towne of Salem 6, in the Towne of Newbery 3, in the Towne of Roxbury 5, in the Towne of Ipswitch 2, and Charles Towne 2.”civ”. From  Colonial Firearm Regulation  by Clayton E. Cramer

It seems that there were exceptions to arms bearing in the 13 Colonies. External enemies: Indian’s, and slaves were prohibited where possible from carrying arms. But so too were those deemed internal enemies also prohibited: heretics, and Catholics. In fact, for the privilege of being barred from the Colonial militias, Catholics were given the privilege of being taxed twice over. Following the Boston Tea Party, the British government proceeded to confiscate guns held by the local militias in the Massachusetts Bay Colony and to impose law and order by use if the standing army. This move only further fanned the flames of revolutionary zeal.

Following the successful outcome of the Revolution, continual anxiety concerning the possibility of potential British reinvasion, together with a continued communal anxiety about Indian attack and slave revolt led Congress to enact the Second Amendment giving constitutional protection to the right of the citizenry to bear arms in self-defense and defense of the community and the state.

Fast forward 300 years and we find that anxiety concerning a communally feared ‘other’ against whom an armed civilian populace was seen as a necessity -no longer reflects our context. Modern-day Americans have no need to protect themselves against Indian attack, slave revolt, the undermining of civic order by heretics, not to mention Catholics or the threat of invasion by a foreign power. Communal and national anxieties of this variety have been replaced by something much more frightening -a fear of one another.

Today the Second Amendment is defended as a necessity in order that we might defend ourselves against our neighbor. In some quarters the right the bear arms is viewed as a necessary protection against even our own government. There is a common saying that the best defense against a bad man with a gun is a good man with a gun. Yet, in our society, beyond a clear threat from armed, unstable individuals and criminal elements, who is it we define as a bad man?

Mutual mistrust now leads us to view our very neighbors, especially those we can identify as somehow different from ourselves, as the objects of fear. A paranoid mindset has taken hold of our imaginations so that our neighbors become viewed as potentially dangerous and unpredictable.

In Friday’s text from Meeting Jesus in the Gospel of John, our Lent 2018 program, we read:

When it was evening on that day, the first day of the week, [the doors being locked for fear of the Jews] Jesus came and stood among them and said, ‘Peace be with you’. After he said this he showed them his hands and his side. Then the disciples rejoiced when they saw the Lord.

In his reflection on this text Brother Geoffrey posed the question: Where are the locked places in your life?

The first disciples were afraid. They had locked themselves away for fear of the world on the other side of the door. For John and his community of Christian Jews, their fear and anger focused on their Jewish neighbors as the community of the synagogue that had recently expelled them. Writing some 60 years later, in the period following the fall of the Temple and the expulsion of the Christian Jews from the synagogues, John uses the experience of the first disciples as a metaphor for his own community’s struggle with fear of neighbor. What is John’s answer to that fear? It is Love. To be more exact it is being loved. But as I explored last week in To Resist Being Loved being loved requires something of us!

In the section of Mark’s Gospel read for the second Sunday in Lent Jesus speaks plainly about the need to rebuke the pervasive state of fear-fulness that grips our hearts and imaginations. To paraphrase his words he seems to be saying:

if anyone who wants to follow me they must first confront their fear, bear their own and one another’s pain and do as I am doing.

In the words get behind me Satan, Jesus rebukes Peter’s unconscious state of fear-fullness, provoked by the foretelling of his arrest and death. His reference to Satan clearly suggests that Jesus sees this state of fear-fullness as misalignment with God, and a state that exposes us to a realignment with the values of this world – values that pose self-defense and aggression, flight or fight, as the only available options.

is the preservation of one’s own life a principle that takes priority over every other principle and value in life?

If we look to the gospel message for an answer, it’s clear that Jesus does not think so.

Instead, Jesus poses the question:

For what will it profit someone to gain the whole world and forfeit their life?

We forfeit our lives when we live from a place of unexamined fear-fulness. We forfeit our lives when we fail to see God’s love of ourselves reflected in the face of our neighbor. I forfeit my life when I believe that my self-defense has a higher value than the possibility that I may be called upon to give my life to save another. In the face of a confrontation with someone with a gun intent on killing me, my being unarmed may result in my death. Although in that moment courage my may desert me, until then, I intend to live as best I can – knowing that living is a risky business.

The invitation heard in all the great religions is to transcend the limitations of our animal instincts. As John witnesses and we can all attest, the antidote to fear-fullness is love. But the commandment to love and be loved requires something of us, a particular kind of surrender of ourselves to God.

If any want to become my followers, let them deny themselves and take up their cross and follow me. For those who want to save their life will lose it, and those who lose their life for my sake, and the sake of the gospel, will save it.

No one has said that accompanying Jesus on the road to Jerusalem will be easy.