In the Piers Paul Read’s novel The Death of a Pope a conversation is taking place over dinner in Kampala, Uganda between a young English reporter named Kate and a Catholic aid worker named Uriarte. Uriarte in explaining to Kate Uganda’s tribal and political complexity mentions the forty-five Bagandan Christian martyrs slain by the 19th century King of Baganda, now modern-day Uganda. Of the forty-five martyrs twenty-two were Roman Catholics, and the rest Anglicans. Uriarte says: the Church flourished on the blood of the martyrs …. it was like the early days of the Church. The Twenty-two Catholics were canonized by Pope Paul VI. Kate asks: Aren’t the Anglican martyrs in Heaven? Uriarte smiles: I dare say, but the Church of England doesn’t make saints. They don’t have a pope.

Of Saints and saints

On the pecking order of sainthood the martyrs are the crowning glory. However, as Uriarte hints at, it remains a thorny question as to what we mean when we talk about the saints? Because the word saint has two distinct meanings depending on whether you are using a capital or a lowercase s. Uriarte is correct, Saints can only be made by the Pope, which after the Reformation severely limits Sainthood to members of the Roman Catholic Church. It’s a nice question: what is the post-death status of the Anglican martyrs, are they non-official Saints or merely saints?

The primary qualification for becoming a Saint is quite simple. You must be dead! The second qualification is you need to have been an elite Christian, or more specifically, an elite Christian who has the good fortune of being in communion with the Bishop of Rome. The great medieval vision of a three-tiered universe has the Saints, triumphantly entering into the presence of God through the portal of death. In the Book of Revelation, John the Divine pictures them robed in white, singing praises before the Throne of God, 24/7. Traditionally, we commemorate the Saints on November 1st with the feast of All Saints. Even for Episcopalians, who as Anglicans can’t really make Saints anymore, the feast of All Saints is so important a feast that it is one of only four feasts that the Prayer Book allows to be transferred to take precedence over the Sunday following the 1st November.

Yet, what about the saints, the ordinary Christians who have died without any record of having lived lives of extraordinary holiness, or died the death of a martyr? Traditionally, these we commemorate in more mournful tones on November 2nd with the feast of All Souls.

The division between All Saints and All Souls represents the Medieval conception of the three-tiered universe. This vision drew extensively from the Apocalyptic literature of Old Testament in writings like book of Daniel, Enoch, 1st and 2nd Maccabees, and carried over in full voice into the New Testament in the book of Revelation. An apocalyptic theme concerns the fate of the souls of the righteous. These were they who had suffered gruesome martyrdom for the sake of the Nation of Israel. By the time of Second Temple Judaism, the religion of Jesus’ day, the souls of the righteous were understood to rest in the hand of God awaiting a full bodily resurrection when the Messiah arrives to restore the fortunes of Zion.

Drawing upon this apocalyptic theme, Medieval Christianity pictured the Saints occupying the top-tier of the three-tiered universe. They were called the Church Triumphant. The souls of the ordinary dead, those non-elite Christians in life, occupied the second tier as the Church Expectant. Their souls did not dwell with God but following death waited in either in a state of suspended rest or writhing in pains of Purgatory, depending on your theology. Here, like the righteous heroes of Israel awaiting the coming of the Messiah, expectant souls must await the Parousia, i.e. the Second Coming of Christ.

At the Second Coming of Christ all the dead, both the souls of the Saints in triumph and the souls of the saints in expectation were to be raised to bodily form again. Resurrection, the return to embodied life, as demonstrated by Jesus was not merely a spiritual life after death, which state the Saints in triumph already enjoyed. Resurrection both in Second Temple Judaism and early Christianity meant embodied life or as N.T. Wright calls it: not life after death, but life, after life, after death.

Which brings me to the third or bottom tier of the three-tiered universe. Here the still living remained in the Church Militant, here in earth. The living, are those who in the words of the great hymn For all the saints: still vainly struggle in the hope that maybe at the end of time, they too, will in glory shine.

The Communion of Saints

Today, the echo of the three-tiered universe still permeates our imaginations. Yet, it no longer dominates our rational minds. Consequently the division between All Saints and All Souls is falling away. Today, we tend to run the two together in one great celebration of All Saints, replacing the Medieval tiered universe with the image of the more egalitarian Communion of the Saints. This is an image of that great cloud of witnesses, envisioned by the writer to the Letter to the Hebrews, surrounding us with perpetual prayer and love. We experience their presence in our lives because as relationship ties people together in this life, relationship continues to unite us with our dead loved ones and all those whose witness in life provides us with hope and courage for our living. This is why in our Anglican Tradition, though we can’t make new Saints, we continue to remember exemplary Christians in our calendar of Lesser Feats and Fasts. The Saints, those canonized by a pope, and the saints, those of our own we continue to remember, are now seen as one, united together with the living within the one Communion of Saints.

For me the division between All Saints and All Souls, no longer resting on a hierarchical distinction between Saints and saints continues to have some meaning, but only in a psychological and not an eschatological sense. Psychologically, the experience of death carries both the hope life with God and the sadness occasioned by the loss of loved ones. Human Beings need both to celebrate and mourn in the face of death. The different notes struck by All Saints and All Souls do at least honor this dichotomy of need.

Going Back to the New Testament

The reference to our having such a great inheritance in the Letter to the Ephesians and Luke’s version of the Beatitudes, both set as readings for All Saints this year, strike a different note concerning the identity of saints. St Paul uses the word saint (hagios) some 44 times. The term appears 62 times in the New Testament as a whole. In the New Testament saint does not refer to the elite Christians whose souls now enjoy immortal life with God. It refers to ordinary Christians engaged in the daily tasks of discipleship on this side of the grave. The hymn I sing a song of the saints of God picks up this usage, 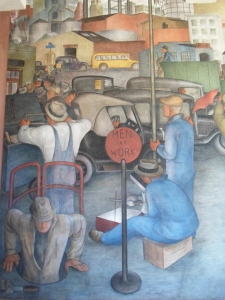 when, allowing for the quaintness of such an English vision it says: …the world is bright with the joyous saints who love to do Jesus’ will. You can meet them in school, or in lanes, or at sea, in church, or on trains, or in shops, or at tea.

In the New Testament to be a saint you don’t have to be dead. Luke tells us that Jesus turning to his disciples began to speak:

How blest are you who are in need; the Kingdom of God is yours.How blest are you who now go hungry; your hunger shall be satisfied.How blest are you who weep now; you shall laugh.How blest you are when people hate you, when they outlaw you and insult you, and ban your very name as infamous, because of the Son of Man. On that day be glad and dance for joy; for assuredly you have a rich reward in heaven; in just the same way did their fathers treat the prophets. (Luke 5:20 NEB)

In the New Testament it is through baptism not death that we become saints. Through our baptism we come into relationship together within the community of Christ’s Church. Here we participate in the miraculous at the level of everyday living. The act of listening brings the miracle of healing to a brother or sister in pain. Sometimes, offering ourselves to stand in the place of fear with another and so signal that together we can survive being afraid contributes to the miracle of courage which is an expectation of the Kingdom in the here and now. The smile of acceptance of another’s difference, the pledge of solidarity with another’s struggle, the generosity and grace in providing material support of money or food to another in need; all are the miracles of everyday life. I call them miracles because through them we participate in God’s regeneration of the world through acts of love and self-sacrifice.

I continue to remind all of us at Trinity Cathedral concerning these two months of our annual renewal program. This is a reflection on our exercise of tender competence for one another and our world.  At the heart of this process is an invitation. As we begin to plan for the ways each of us will support the life of this community in 2014, God is inviting each one of us to connect with the sources of gratitude in our lives and to become accountable to our calling as God’s saints.  God invites you and me to live up to the nobility of our saintly calling by never missing an opportunity to embrace a generous action. Gratitude, generosity, and service, these are the building blocks in the Kingdom of God. The Kingdom of God, like being a saint, is not something for the life hereafter. It is living and active, cutting like a two-edged sword in the here-and-now of our lives together.

We have a role to play: be it high and lofty, or down and dirty, for the saints of God are folk like me, and I mean to be one too! (Steve Pankey November 5th 2012 sermon All Saints Feebly Struggle – a sermon)