At St Martin’s in Providence, we have embarked on a community reading of the Bible in the form of something called The Story. On Sunday, May 15th, after celebrating the birth of the Christian people of God on the Day of Pentecost, an event recorded by Luke in Acts 2:1-11, we will gather in our adult forum to review and discuss our experience of having read chapters 4-6 in The Story. Chapters 4-6 cover the period from the Israelite’s exodus from Egypt, through the 40 years of wandering in the wastes of Sinai, to their arrival on the borders of Canaan, a land flowing with milk and honey promised by God.

In our discussion of our reactions to reading The Story, we are beginning to be brave enough to speak openly of our dislike of the God presented in much of Genesis and Exodus. This is God, filtered through the imagination of a primitive, nomadic, warlike, tribal people. This is God portrayed in their own image, a ruthlessly jealous God, who when crossed responds with threats and actions of genocidal retribution. Yet, theirs is also a God who desires connection, a God capable of intimate relationship with Moses, a God who is responsive to the demands of relationship. God is amenable to Moses’s constant interceding not to destroy that which God also loves. We see in these pages a perception of God, who like the people God is attempting to preserve, struggles to walk the tightrope between the impulses of love and hatred, between the desire to preserve and the impulse to destroy when the object of love, disappoints.

Human experience of God is mediated through the structure of our imagination. In the pages of Genesis and Exodus, God emerges into an Israelite tribal imaginary. Our understanding of the events on the Day of Pentecost likewise permeate through the imaginations of the writers of the early Christian period. The imaginations of Paul, John and Luke communicate an experience of God at a point when Jewish thought is struggling to break out of a narrow xenophobic imaginary of God into a universalistic realization of the age-old dreams of the prophets.

The lectionary for Pentecost Sunday offers a multiplicity of choices including Genesis, the Palms, Paul’s letter to the Romans, Luke-Acts, and John’s gospel. For the first Christians, the Day of Pentecost recalls an experience of God, which they could only articulate through the images of the rushing sound of a mighty wind, the descent of flames of fire, and instantaneous translation. On the Day of Pentecost, the followers of Jesus had an experience of total transformation, which could only be articulated through metaphors of the human imagination.

Any reference to Spirit – Holy Spirit has to be set against the first chapter of Genesis, which open upon a huge panorama: In the beginning, God created the heaven and the earth. And the earth was without form, and void; and darkness was upon the face of the deep. And the Spirit of God moved upon the face of the waters. The Hebrew word used for Spirit is the feminine noun Ruach. The Spirit of God is God self-identifying through the feminine principle for which she is the appropriate pronoun use.

In the 22nd verse in the 8th chapter of his letter to the Romans, Paul continues to mine the feminine principle within God as he depicts all of creation struggling in the travail of giving birth: for we know that the whole creation has been groaning in labor pains until now. Paul cements the feminine imagery intrinsic to God when he tells us that we too, continue in labor’s grip, groaning, panting, and pushing, driven by the hope of imminent new birth. In this state of travail, the Holy Spirit, like a midwife comes to our aid, supplying the strength we need to give birth to a new world.

For the Evangelist John, as Jesus bids farewell to those he has loved he tells them that: And I will ask the Father, and he will give you another Advocate, to be with you forever.  The Advocate will empower the disciples into an expanded imaginary of the love of God, enabling them to do even greater deeds than Jesus has performed.

The most popular image for the Day of Pentecost, the 50th day of the Resurrection, is given by the Evangelist Luke. Luke constructs a chronology of unfolding events from the resurrection, ascension, to the climactic moment in history when the Holy Spirit penetrates the created order. For Luke, the coming of the Holy Spirit marks the point of transition between the ministry of Jesus and its continuance in the life of the Church, now impregnated with God’s Holy Spirit.

Luke wants to draw our attention to the effects  of the interpenetration of human hearts with the Holy Spirit. The heat of fire, the sound, and rush of wind, a spontaneous understanding of the Spirit speaking to each in his or her own native tongue are metaphors for transformation. He juxtaposes these events with the story of the Tower of Babel in Genesis 11, where an older imaginary of God as jealous and somewhat insecure, fearful of human achievement needs to thwart human aspirations. God says: Come, let us go down and confuse their language so they will not understand each other.

On the day of Pentecost, all witness the descent of the Holy Spirit upon them, each hearing God speaking in their own language. The curse of Babel is lifted. Difference is no longer a source of division but of enrichment. Luke’s theological message is that for human society – born anew as the Church, it is no longer the business as usual of the old order.

God in a contemporary imaginary

The World is charged with the grandeur of God. It will flame out, like shining from shook foil; It gathers to a greatness, like the ooze of oil – crushed.

Yet, against the background of this optimistic proclamation Hopkins questions why humanity is so reckless of God’s gift of creation:

Extending Hopkins’ inquiry, looking around us at the world in 2016, we see how easily human beings can be excited to fear the differences that lie between us?  Our labor pains are marked by the futility of war and the injustice of oppression in which generations have trod, have trod, have trod. We have become insensible to the feel of the earth, increasingly made barren beneath our shod feet. Our social relations are mired: seared with trade, bleared, smeared, with toil sharing man’s smudge.

We notice that we are not all the same. We notice the obvious differences between us expressed through gender, sexuality, race, culture, and class. Such differences become emblematic of the differentials of power, privilege, and access to the protection that difference affords to some and denies to others.

The birth of the new Spirit-filled order comes as a challenge to the human propensity to distribute power, unequally. Luke’s vision of the Holy Spirit is of the anima – the feminine principle of new birth embracing and celebrating the rich diversity of being human. Difference no longer needs to be the source of division but becomes a celebration of diversity as the Holy Spirit calms our fear.

From the perspective of 2016, on the Day of Pentecost, a contemporary imaginary of God comes to light. This is an inclusive and universal God. God embracing all kinds of diversity is continually coming true in Church communities of bewildering variety. Pentecost presents us with an image of God as Spirit now impregnated deep within the human DNA as that longed for God shaped space, or as Hopkins more poignantly says it:

And for all this, nature is never spent; There lives the dearest freshness deep down things; 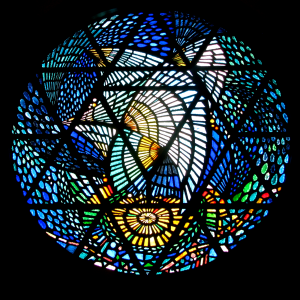 And though the last lights off the black West went  Oh, morning, at the brown brink eastward, springs –
Because the Holy Ghost over the bent
World broods with warm breast and with ah! bright wings.