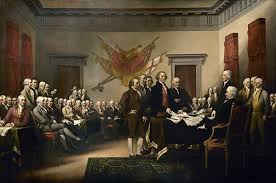 On the 4th of July Weekend, the last thing I feel inspired to do is write a sermon for Sunday. The prospect of a less than half full Church, and the general atmosphere of weekend enjoyment and celebration sap me of any will towards inspired utterance.

I notice that I have a number of fragmentary associations coursing through the neural pathways in my brain, leading to seemingly unrelated thoughts about the 4th of July, current politics, and the readings for the 7th Sunday after Pentecost.

Some of the difficulties we currently experience in engaging in civic discourse reflect the fact that a conversation across the social divides – political, racial, religious – is now a conversation of the deaf. It’s easy to point to those others and see how deaf they are to one’s own point of view. Yet, temperamentally tolerant types like me, experience real difficulty in the current environment of seriously listening to any account of the world that does not accord with my own worldview. We are all the victims, each of us falling under the sway of the zeitgeist, i.e. popular mood of the time – a mood of fear and suspicion.

In the Western World, it seems to me we are witnessing an increasing attack upon our systems of representative democracy. In the US, we frequently hear politicians defend inaction in the name of letting the people speak. The Senate will not meet, let alone enter into confirmation hearings for candidates proposed to fill Supreme Court vacancies on the pretext of waiting for an opportunity to let the people speak through the presidential election. This constitutes a serious attack on the institutions of representative government.

The UK has undermined the structures of its representative democracy. The Cameron government has gambled and lost its risky wager. In an attempt to secure its own political advantage it allowed a referendum on the UK’s membership of the EU. Let the people speak is a dangerous slogan in the hands of a political class increasingly clinging to electoral power through inflaming and exploiting public anxieties.

The Founding Fathers were not democrats- with a small d. They not only feared autocracy, they also feared democracy, knowing full well the dangers of mob rule. They knew the popular will was something most vulnerable to manipulation and exploitation. Consequently, the Founding Fathers were republicans – with a small r. The republic is one form of representative democracy. Parliamentary democracy is another.

The American and British systems of representative democracy both evolved as lessons learned from the horrors of the French Revolution, an event that ushered in a century of civic bloodletting and European war. In the face of the threat to liberty from an imperial autocracy, the Declaration of Independence celebrated on the glorious Fourth, embodies the Founders refusal to abdicate their historic liberties enshrined in English Common law.  Yet, just over a decade later, the writing and ratification of the Constitution embodied the Founders response to the threat to national unity from populist democracy. The Articles of Confederation championed the partisan interests of each of the States against one another, undermining the collective and national interests of the new nation.

Tribalism is a stage of social evolution characterised by small ethnic, social, or religious units, each firmly believing that God is on their side. The notion that God is on our side is one of the most pernicious examples of idolatry. Any notion of our god replaces the God with a culturally, or politically constructed, idol.

There is a view that sees the development of our Western Society as a linear evolutionary process in which successive social, cultural and political developments and organisational states replace previous social, cultural, and political stages of organisation. Thus, mutually hostile tribal groups eventually coalesce to form larger ethnic, religious, or culturally based confederations. These larger units after a period of time coalesce into empires. Empires eventually regress at points of crisis into their constituent, homogenous cultural, ethnic, or religious units to become nation states. Nation states ususally represent ethnic, cultural, or religious identifications. As with earlier tribal units, after a period of renewed mutual rivalry and hostility, neigboring nations coalesce back towards wider collaborative collectives. The driver for coalescence at each stage of evolution is perceived self-interest leading to a sustained experience of collective self-interest, i.e. we gain more through coopertaing than we do through fighting.

Another view is that this evolutionary process is far from linear and more holarchical, as in holographic. Each part of a hologram perfectly reflects every other part. Concepts of linear or hierarchical development rest on the notion that successive stages of organisation replace and leave behind previous ones. By contrast, holarchical development sees successive organizational stages as embracing and including previous ones. Nothing is left behind, nothing completely forgotten. Every previous rung on the evolutionary ladder still remains within the successive stages of development, every ready to reassert itself when evolutionary momentum reaches a crisis point. Crisis points have the potential to reverse evolutionary momentum and developmental direction. Successive stages collapse and regress back into previous states of organisation.

The American experience is of 13 communities that for 200 years identifed as colonies within the British Empire. Increasing political and economic pressures led on the 4th of July in 1776 to the Declaration of Independence, triggering an armed insurrection in defense of historic liberties dating back to the Magna Carter. During the war for independence, the 13 colonies were forced to coalesce around new, mutual identification as a fledgling American Nation. The new nation emerged through victory into a collective of sovereign states volunteering, in as far as their self-interests allowed, to coalesce within a loose confederation based on shared cultural, political and economic history. In 1787 these sovereign states elected to cede sovereignty via a written Constitution to a federal structure with a central government. 1789 is the point at which we can really speak about an American Republic as we now understand it.

Today, under the crisis pressures of economic globalization, the fears generated by the rise of militant religion, and mass population migration the US suffers a paralysis of representative governmental institutions allowing earlier ‘tribal interests’ to reemerge as the voice-s (for there are several tribes) of popular discontent. The EU, which developmentally is in the stage between a confederal and federal structure, struggles to face the same pressures affecting the US. The difference though is that it’s not the tribal voices within a single nation but the national voices within a confederation of nation states that gives voice to popular discontent. The British are simply the first to be offered the mechanism of referendum to express the rise of populist, xenophobic sentiments, and because of the failure of the Cameron government’s calculation, they are likely to be the last.

Yet another neural pathway

The readings for the 7th Sunday after Pentecost cover the historical span from 800-850BC to 70 AD. Three readings, one from the Second Book of the Kings, one from Paul’s letter to the Galatians, and one from Luke’s Gospel all express the tension between tribal and universal visions of God.

It’s Naaman, the commander of the Syrian army and vanquisher of Israel to whom God gives healing. Paul proclaims to the Galatians that neither Jewish circumcision nor Gentile uncircumcision counts for anything when compared to the new creation God offers to everyone through Christ. And Luke records Jesus sending out of the 70(2) disciples to the towns of Galilee. 70(2) is a number that signifies the 70 gentile nations of the ancient world.

For me, the challenge is always to apply the universality of God to my experience of the world. I am deepely commited to this in principle, but the rub is applying it in situations where annimosity and fear shape my encounters and reactions. I long to be able to cease seeing the world in dualistic, oppositional terms? Isn’t it true that most human beings simply want the same thing: somewhere to safely live, someone to love and to be loved by, something to do that brings a sense of self-worth and contributes towards the greater good. We come to fear one another when we believe that there is not enough of these basics to go around.

What if there is no their god or my god, but only our God, and the reality that the Kingdom of God has come near to us. What then? Maybe something like this. I invite you to visit this link, either here or on our FaceBook site.