A sermon from the Rev. Linda Mackie-Griggs for Pentecost 18

And his master commended the dishonest manager because he had acted shrewdly.

If the words that describe your feelings about today’s Gospel lesson include, “frustrated”, “shocked”, “stumped”, or “baffled”, you are in good company.

All of these words were used by scholars who wrote commentaries on this passage. It seems to fly in the face of everything we understand of proper moral/ethical behavior. Why would dishonesty in business dealings be commended by Jesus? How is it possible to be faithful with dishonest wealth? Just the disjointed nature of the narrative—a puzzling story followed by a series of aphorisms—this belies Luke’s usual reputation as a fluid master storyteller.

There is no getting around the fact that this is a parable about money. Whereas in last week’s sermon Fr. Mark talked of Jesus being political,today we see Jesus focusing on economics. Look at where this story nestles within Luke’s Gospel: First, in the verse immediately following this passage, Luke writes: “The Pharisees, who were lovers of money, heard all this, and they ridiculed him.” Further along in the chapter, we see a parable about a rich man who suffers in Hades after having ignored a poor man at the gate of his home.

And finally, the parable that comes right before today’s story is the Parable of the Prodigal Son, which is all about God’s economy of mercy and forgiveness; a kingdom vision of generosity and prodigious welcome. So from context alone, we can see that this is an invitation to look at money through the eyes of the Kingdom. Which brings us back to the original question, all in red capital letters, how in the world does the kingdom vision connect to a dishonest manager? It just doesn’t make sense.

Yet. Think for a minute about Jesus’ relationship with money. Think, for example, about his calling of Zacchaeus the tax collector. When Zacchaeus chose to follow his Lord he immediately rejected the economic system from which he had made a dishonest living, saying that he would give half of his wealth to the poor and repay fourfold the amount that he had cheated from people. The Jesus that Zacchaeus follows is the same Jesus who will rail in fury as he overturns the tables of the moneychangers in the Temple. The same Jesus who blesses the poor and urges his followers to store up treasure in heaven where moth and rust will not corrupt nor thieves break in and steal. The Jesus who says that where your treasure is there your heart is also.

Now think about what connects these images to each other, and to what we hear today. It’s all about inversion. Turning things turned upside-down. The ways of the Kingdom are not the ways of the status quo; of the principalities and powers; of the unjust economic priorities. It’s all subverted in the Kingdom.

That’s what the Gospel does. A manager, responsible for his wealthy employer’s property, squanders it; we don’t know how—but we do know that to squander is to scatter all over the place—you can just picture this guy throwing money around—and we know that because of it, he was about to be fired. And his thought process was all about making sure that even if he wasn’t in his boss’s good graces

he would still have a few favors that he could call upon in the lean times: “…so that, when I am dismissed as manager people will welcome me into their homes.” So he has his customers alter their statements of indebtedness to the master: One cuts his debt by half, the other by twenty percent. This seems to be adding insult to injury. The manager has already squandered his master’s property and now doubles down by unapologetically doing it again. And of course, we expect that the master will be furious to see his property being treated so cavalierly.So we are stunned when the master commends the manager for his shrewdness.

Many discussions of this story hinge on this point, saying that Jesus is exhorting his hearers to pursue the treasures of heaven with the zeal and shrewdness of the manager. This is a fair interpretation; why should we not be shrewd and crafty and creative as we seek the riches of the Kingdom?

But perhaps we can go a little deeper. Maybe it’s not just about what we go after; it’s about what we leave behind.So here’s a question: Under what circumstance is it commendable to treat earthly wealth with abandon; to hold it as lightly as the manager does? Jesus’ paradigm for money is just such a circumstance; a paradigm where earthly wealth and security are weighted differently from the riches of the Kingdom.

Scott Bader-Saye points out a small but significant detail in translation that may be helpful here. He notes that there are two different references to ‘home’ in this passage: The first, that I just mentioned, is where the manager wants to be welcomed into the homes—the houses—of his hoped-for benefactors. The second reference is where Jesus says, “And I tell you, make friends for yourselves by means of dishonest wealth so that when it is gone they may welcome you into the eternal homes.” According to Bader-Saye the word here for ‘homes’ can also be translated as ‘tents.’ This is the kind of home that represents pilgrimage. It represents a transformative journey of learning to let go of things that possess us. When Jesus admonishes us to ‘be faithful with dishonest wealth—or mammon—might he be asking us to hold wealth as lightly, and maybe to even to squander it as the manager does, but not for the purpose of the kind of false security of possessions; but instead to gain the true security of faith in the God who provides for his beloved flock? So this isn’t just about treasures in Heaven; it’s about living in such a way that we help the Kingdom break in right now.

This is not an easy parable. Sometimes it feels to me like the biblical equivalent of looking at an MC Escher 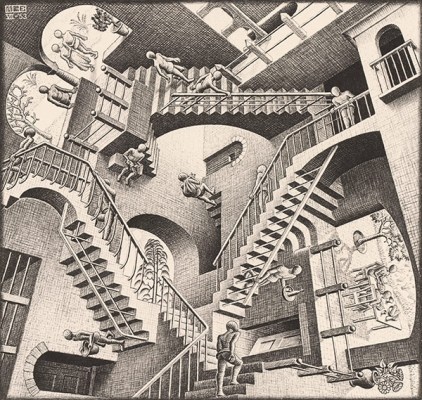 A very timely article appeared in the New York Times a couple of weeks ago. In the regular ‘Your Money’ column, Ron Lieber asked, ‘What if You Weren’t Afraid?’, and Four More Money Questions from Readers.

Each of the responses revealed what people had learned about letting go, not simply of money, though that was part of it, but letting go of external expectations of material success, and focusing on the core values of generosity

and of understanding that living abundantly isn’t about an abundance of things. One woman in particular stood out in Lieber’s story. She had grown up learning from her Depression-Era parents that when it came to finances, she should always, always hedge against scarcity. She decided that she wanted to derive more joy from spending her money and discovered that spending it on herself wasn’t nearly as delightful as spending it on others. Of her newfound perspective of her finances, she observed, she would rather ‘dote on people’ because thrive is the root word of thrift’.

So Jesus hasn’t asked us to jettison our ethics after all. He’s invited all of his children to thrive; to jettison instead the mentality of an economy of scarcity; and to live every day as if on pilgrimage; lightly, creatively and generously, helping to make an earthly reality of a Kingdom vision of God’s prodigious, squandering grace.