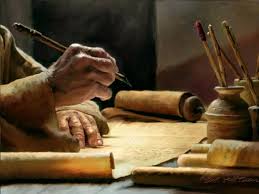 So Geroge Bernard Shaw opined. I was put in mind of his words when I faced up to one of Paul’s most controversial sections; Romans chapters 9-11, three excerpts from which comprise the New Testament readings for the Sundays August 6-20th. Romans 9-11 are somewhat controversial because in them Paul gropes around his core dilemma – the place of the Jews in a post-Jesus world.

In the shadow of the Holocaust, Christians rightly should be wary of reading Paul, or any of the canonical writers for that matter through the later lens of anti-Semitism. I say later lens because while anti-Semitism casts a long and very dark shadow across the fabric of Western Civilization, it’s not an attitude found in the New Testament. Perhaps with the possible exception of Luke, the New Testament writers were all Jews doing what Jews had always done and continue to do – namely, engage in fierce internal disputations with one another. For this reason, it’s all the more ex-cru(x)-ciating [1]  when we find the history of anti-Semitic sentiment inflamed by a most heinous misuse of New Testament texts as justifying a later widespread attitude of persecution towards the Jews.

The word is very near you, on your lips, and in your heart – for one believes in the heart and is justified, and one confesses with the mouth and so is saved.

numbers of gentiles, his own people, the Chosen People, reject the message of the good news. Being a good Jew he draws from Moses’ words recorded in Deuteronomy 30:1-14 reminding the Israelites that: the word is very near you, on your lips, and in your heart:. Paul interprets these words to mean the word of faith, which is now Jesus. He says: for one believes in the heart and is justified, and one confesses with the mouth and so is saved.

Paul loves his nation. He is a Jew, and not just any kind of Jew, but a Pharisee of the strict observance party. He struggles here and elsewhere in his writings to make sense of what for him is the source of greatest suffering; his own people’s rejection of Jesus as the Messiah.

In this past week, I came across one commentator saying in his commentary on Romans 10:

Will it finally work for Israel?  Will they hear something that at long last opens their hearts and their eyes to embrace what until now they have rejected?  It is, as Paul knew painfully well, hard to say or predict.  What we know for sure is the obvious answer to Paul’s rhetorical question: How can they hear unless someone preaches to them in the first place? [2]\

It’s unclear to me whether the writer’s words are describing Paul’s dilemma or affirming a contemporary supersessionist sentiment. Supersessionism is the name given to the doctrine that in Christ God has superseded the Mosaic Law; the New Covenant signed in Christ’s blood has now displaced the old dispensation of God’s convent with Israel. You don’t have to be a rocket scientist to see that the seeds of anti-Semitism germinate well in the fertile supersessionist soil.

On Providence’s Eastside, a small lane lies between the congregations of St Martin’s Episcopal Church and the Reform Temple of Beth-El. The challenges and opportunities of Jewish Christian relations are a daily reality for me. To this end, St. Martin’s and Temple Beth-El are seeking to establish a regular Temple-Church Conversation, open to both congregations and members of the wider public. However, as a religious leader, liberal sentiment is not a robust foundation on which to stand. Instead, the ground upon which I take a stand relies on the Bible and my ability to interrogate my own Scriptural tradition. This is the basis upon which I am led to the firm conclusion that supersessionism is not simply illiberal, it’s unchristian.

Past and future promises; a conundrum

At the heart of Paul’s struggle lie the crucial questions about God’s reliability, constancy, and fidelity. Does God’s history (past promises) matter for God’s future (pledges about what lies ahead?)[3] He refers to his own people as Israelites. Why would he use such an archaic term, no longer used in his time, if not to deliberately conjure up the loaded imagery of God’s historic promise to Israel?

Paul’s heartfelt question is that in the light of what God has done through Jesus – is God still going to remain faithful to the promises made to Israel enshrined in the Law of Moses? If the answer is no, this cuts at the foundation of Paul’s understanding of God’s faithfulness as promise keeper. If yes, then how come the Jews don’t respond affirmatively to God’s invitation? You see his dilemma.

Unlike the Church in the centuries that follow, actually, Paul implies no judgment on the Jews for rejecting Christ. He writes as one steeped in the Hebrew prophetic tradition in which he struggles to make theological sense of the age old repetitive themes of disobedience and restoration within the relationship between God and his chosen people. In the end, despite the pain of his people’s rejection of Christ, Paul’s affirmation of what he knows to be true about God’s faithfulness as a keeper of promises compels him to shout out his startling conclusion: For there is no distinction between Jew and Greek; the same Lord is Lord of all and is generous to all who call on him.

Paul wants to dream of things that are clearly not the case and ask why not? He has an argument to make, which is not the liberal one of everything is everything and so it doesn’t matter that the Jews reject Christ. In chapters 10 – 11 he continues to painstakingly lay out his case for why the Jews should accept Christ, while the unlikeliness of this happening is increasingly dawning on him. At the end, all he can be sure of is that the word of salvation remains very near, and it’s a matter of God’s gift how Jew and now Greek access the promise of salvation.

Shaw’s comment that some look at things as they are and ask why, while he dreams of things that never were and asks why not strikes me as going to the heart of the challenge Scripture presents. Each generation approaches Scripture from a generational context within which each of us is invited to respond to texts that refuse to behave according to our expectations.

Whether liberal or conservative, the Bible can confirm as well as confront our socially constructed sensibilities. It is true that at the level of words on the page, Biblical texts are frequently ambiguous. As we read through the Book of Joshua, the portrayal of genocide as a God sanctioned tool in the hands of the Israelites challenges us to our core as we look out on a world where once more genocide becomes a political and ethnic weapon. Genocide as God’s will affronts our sense of right action and the God whose law is love. Yet, lurking below the surface of our own cultural belief in American manifest destiny lays an appeal to the Israelite conquest of the land of Canaan as our justification for the westward expansion that claimed a land we came to perceive as promised to us.

Yet, when we raise our eyes above the words on the page to pay attention to the multigenerational story we call the Judeo-Christian epic’s historical trajectory, we are confronted with a story that bends in the direction of justice and freedom for all. From our cultural and historical perspective, the claim that the arc of the moral universe bends towards justice is because the Judeo-Christian epic bends it in that direction. It continually refuses to settle for the way things are and dreams of the way things could be.

Coming down from the lofty heights I want to get back to Paul. It seems to me that this is actually what Paul is trying to do. He finds himself trying to reconcile his conflict between the reality of Jewish rejection of Jesus and what he knows to be true about God’s faithfulness to past promises made to Israel.

In the Lectionary we still have one more week to go in our helicopter exploration of Romans 9-11. For me, it’s always been easier to skip over Romans 9-11 as if they’re not there. Skipping over unpalatable bits is after all our most frequently used hermeneutical tool.

Yet, as my community struggles with the challenges of working through The Bible Challenge, a 360-day program of reading the entire Bible, since Easter we’ve been daily confronted with the bewildering and often unpalatable texts of the Torah and its images of a tribal God. Currently, as we struggle through the genocidal accounts in the Book of Joshua, we are fast learning together that the Bible is not a nice book that behaves itself according to our post enlightenment expectations. Because as Paul himself finds out, God is not a God who behaves according to our expectations.

To move beyond merely looking at things as they are and settling for asking why, into dreaming of things that are still to come and asking why not, remains Scripture’s most enduring promise.

[1] My peculiar treatment of the word excruciating is to allude to the Latin for cross – crux that forms the semantic root of this word.