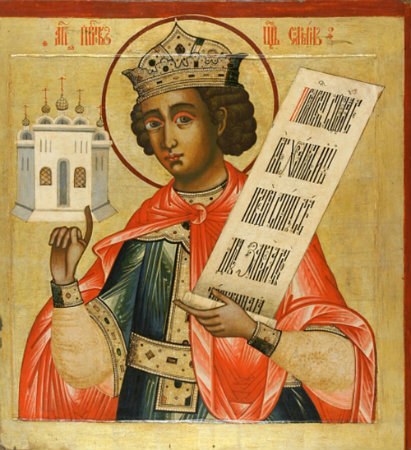 Since June, I’ve been following the unfolding Deuteronomic history chronicling the evolution of government in ancient Israel. It’s an increasingly sorry tale as it continues into the books of the Kings. The O.T. lesson for Pentecost 13 opens in the second chapter of I Kings with the statement:

David slept with his ancestors and was buried in the city of David.

David reigned an astonishing 40 years – remember life expectancy was short in those days – 7 years at Hebron and then after he conquered Jerusalem, and further 30. His son Adonijah was the next in the line of succession but David passes the throne to Solomon, his son by Bathsheba.

The weakness in authoritarian regimes lies in the unpredictability of succession. As the once strong leader begins to fail, in the absence of constitutional processes governing the strict line of succession, factionalism thrives. In David’s last years, anxiety increased about who would succeed him as those who had once been the king’s fixers, his right-hand men, vied to influence the succession.

Before his death, David advises Solomon on how to clear the field by killing the opposition ringleaders to not only clear his way to the throne, but also to settle some of his father’s old scores, the hand of retribution from beyond the grave as it were.

The Lectionary notes the death of David in II Kings:2,10-12, but then it then skips over the rest of chapter 2, picking up again at chapter 3. For us, however, it’s important to know what is happening in the omitted verses 13-46 – quite a chunk, in order to have the fuller picture of events.

Adonijah appears to accept being passed over but then gives Solomon an unexpected excuse to move against him when he manipulates Bathsheba into petitioning Solomon to give him Abishag for his wife. Abishag, you will recall, was the young woman chosen to be David’s last wife, a young woman to warm the old king’s feet in his failing years. For Adonijah to claim her seems to indicate a roundabout way of asserting his rights to his father’s inheritance.

In common parlance, Solomon is doubly pissed. He is pissed not only by Adonijah’s effrontery but also at his mother for allowing herself to become Adonijah’s tool to get to him. Solomon orders Adonijah struck down and killed and then moves swiftly against the opposition ringleaders. Joab, once the commander of the army, seeks sanctuary by grasping the horns of the altar. The Law of Moses allowed a fugitive to seek safety if he could get to the Tent of Meeting and grasp the horns (corners) of the altar. Incidentally, this is the basis of the claim of churches as places of sanctuary, which is currently being asserted to give shelter to refugees fleeing the harsh implementation of immigration law.

Solomon nevertheless has Joab struck down in the heart of the Holy of Holies – take note, Mr. AG. He then deposes Abiathar as high priest, exiling him to his home village. Zadok, a passionate supporter of Solomon now becomes high priest and the way is cleared for what happens next.

Solomon is described as one who loved the Lord and walked in the ways of his father. But he immediately goes to Gibeon, one of the cultic high-places where local pagan deities were worshiped and makes a sacrifice of 1000 burnt offerings. In the Deuteronomist account, it’s all a little odd, for this action clearly indicates unfaithfulness to YHWH. Nevertheless, the Lord comes to Solomon at Gibeon and invites him to make a request.

We then have what’s known as Solomon’s great prayer, which many over the centuries have taken to be the perfect template of prayer. In it, Solomon asks not for power or riches, but wisdom. The Lord is so impressed by Solomon’s request that he throws in power, riches, and long life anyway. For the discerning, there is a sting in the tail here, for God lays a condition on the long-life bit of the gift. Solomon will enjoy long-life as his father had done only if he walks in YHWH’s ways. We need to note that Solomon only lives to the age of 60.

Like his father before him, Solomon is also a complex figure.  Admired by Judeo-Christian tradition as the archetype of wisdom, as the one chosen by the Lord to build his Temple.

Yet, Solomon also went his own way. He married many foreign wives, a thing that was anathema according to the Law of Moses. His first wife was Pharaoh’s daughter, and according to legend even the Candace, the Queen of Sheba (Ethiopia) journeyed to pay homage and become the most erotically enticing in a succession of foreign wives.

To add insult to injury, not only was marrying foreign women and insult to YHWH, but Solomon allowed his wives to set up shrines to their gods in the high-places and he even worshiped there himself. He was a brutal monarch, taxing his people ruthlessly and indenturing his male population in the service of the building of the Temple.

His corrupt foreign ways, his worship of pagan gods, his economic oppression of his own people, set the stage after his death for the secession of the 10 northern tribes of Israel, leaving only Judah and Benjamin as a remnant of the Davidic kingdom.

In omitting the bulk of chapter 2, the Lectionary has edited the text to emphasizes the identification of Solomon with wisdom, so as to segway in two weeks time from the Deuteronomist history into the Wisdom books of Proverbs, Songs (of Solomon), and Wisdom (of Solomon).

A recurring central theme in the Wisdom literature concerns the way human understanding pales against the grandeur of creation, which itself is the expression of God’s wisdom. Wisdom’s themes explore opposite pairings: righteousness/ unrighteousness, death/immortality, meaning/meaninglessness, hubris/futility, joy/sorrow.

The final judgment of the Deuteronomists on Solomon is mixed. According to their narrative, God gave Solomon wisdom, entrusted him with the building of a permanent dwelling place to house God’s spirit on earth. They also recognized that through his ruthlessness in furtherance of his own ambitions, and the single-minded pursuit of his own pleasures, Solomon ultimately destroyed the legacy he had inherited. Unfaithfulness to God did in the end, cut short his life.

Based on the absence of hard archeological evidence, some historians of the period doubt whether Solomon ever existed. Certainly, much modern opinion is that the great Davidic kingdom as presented by the Deuteronomists was anything but great. The Deuteronomic history is the product of a later period. 600 years later, the scribes engaged in a monumental root and branch editing of the Hebrew Scriptures during the Babylonian Exile, had a need to paint a picture an imagined golden age from which to trace Israel’s decline as an explanation for their current experience of having been abandoned by God.

I believe the value of the Deuteronomistic history lies not in its historical accuracy or veracity.

Its value lies in its power to remind us of timeless truths. That the nature of power corrupts and absolute power corrupts absolutely. That human government left to its own devices rests on the principle that power is there to be abused.

In the record of the Deuteronomists description of the tensions between faithfulness to God and the corruptions of worldly power played out between prophet and king, it’s not hard for us to hear some striking echoes of the tensions in our own time. Our society is grinding under the weight of increasingly huge disparities of wealth between the 1% and the rest. Under the pressure of unrestrained corporate greed, we turn a blind eye to the compounding of individual and national debt. Western democracies are increasingly retreating in the face a resurgence of authoritarian-nationalist political instincts riding on the uncertainties and fears of peoples in a time of rapid change.

From Samuel, through David, to Solomon and beyond, we see God’s glory encased in vessels of clay. Solomon is the proverbial everyman, he is you and me.  Like him, we too are creatures of our time and shaped by our culture. The continuing scandals of church child sexual abuse only too painfully reminded us that even our religious institutions while pointing us beyond ourselves are at the same time, all too corruptible and fallible.

Like Solomon, we aspire to love God, but mostly we follow our own counsels. We long to give our full allegiance making Christian faith the unifying story around which our lives take shape, yet mostly, we march to the drumbeat of lesser stories that promise us more than they can deliver. The extraordinary thing is how we nevertheless give allegiance again and again to stories that if we did but remember led to disastrous outcomes last time we placed our faith in them.

The timeless truth, that God challenges us to remember the covenant made with Israel which has now been fulfilled in the death and resurrection of Jesus Christ is the only story with the power to shape our times in the direction we truly long for. Like David and Solomon, we too are the earthen vessels made of clay struggling to contain the divine vision for creation. Occasionally we hear God calling us to be better than we currently are and to do better than we have done.