Some Pharisees came, and to test Jesus they asked, “Is it lawful for a man to divorce his wife?”

The first advice that I came across as I began preparing to preach for today was, and I quote: “Beware this week.  As soon as you read the word, “divorce” aloud, a whole sermon will appear in people’s heads.”

The guy’s got a point. Sort of like saying, “Don’t think of an elephant”, there is virtually no way to read or hear this passage without becoming distracted from anything that immediately follows. (You are thinking of an elephant, aren’t you?) But this isn’t an elephant. It’s an emotionally fraught issue, almost sure to evoke a reaction to one’s own story or that of a loved one; of guilt, judgment, anger, loneliness, sadness—the opening of a wound of some kind. Because divorce is by definition the death of a relationship, and with death comes grief. This is why today’s Gospel is one of those passages that, tragically and too often, can be weaponized. And as a result, there are those whose experience of divorce has left them alienated from church and community. There are those who have been coerced to remain in an abusive marriage. There are those who hear Jesus’ words about marriage being between man and woman who have been led to believe that this is God’s judgment on gay marriage. The irresponsible use of the Bible as a cudgel to elicit cultural conformity is, unfortunately, more common than not, and this isn’t a new phenomenon. The thing is that people forget that there is a huge difference between seeing the Bible as a source of wisdom— wisdom that is admittedly often challenging– and seeing it as a way to confirm one’s own biases.  So here’s a little word to the wise: The more comfortable a passage like this makes you feel, the more likely it is that you should take another look. And then another.  And if you find that it disturbs you, keep reading, keep thinking, keep listening. God has something to say—it just may not be what you expect.

The key with today’s reading is that, as tempting as it may be to divide the text into two separate encounters, we need to look at the entire passage as a whole. Because the author of the Gospel of Mark has intentionally ordered and constructed his story in such a way that we see, not just random episodes and parables tossed willy-nilly on the page; we are meant to see a vision of the Kingdom—the Dream of God.

“Some Pharisees came, and to test Jesus they asked, ‘Is it lawful for a man to divorce his wife?’”

The idea of seeking to test Jesus is nothing new; it was a frequent pastime for Temple authorities. There were at least two ways that they might have been doing this, and both carried the potential to get Jesus in trouble (which is what they desired). Socially and politically, divorce was a hot topic during this period because of the scandal of the marriage of the Roman Tetrarch Herod Antipas to his brother’s ex-wife Herodias. When John the Baptizer pointedly criticized them for this he was specifically talking, not just about divorce per se, but about the fact that they had obtained a divorce for the purpose of marrying another.  As you may remember, John’s criticism resulted in the loss of his head; perhaps the Pharisees hoped for a similar outcome for Jesus, that upstart Nazarene?

Or, thinking from the standpoint of scripture, the Pharisees might have been trying to involve Jesus in an argument regarding the law of divorce as stated Deuteronomy 24:1, which says that a man may divorce his wife if he found “indecency” in her—he can then write her a certificate of dismissal, as they called it, and divorce her. The argument among different groups of Pharisees was how strictly or loosely to interpret the term, “indecency”.  Some felt that it meant unchastity, while others interpreted it more loosely as “indecency in anything”, as in; she burned dinner or forgot to buy lamp oil, or she dared to “speak as any foolish woman would speak”, as we heard from Job in the first lesson. Regardless of how ‘indecency’ was defined, a husband could divorce his wife pretty much at will, which effectively left the woman tossed out on her ear with nothing; no voice and no recourse. It wasn’t that a woman could never initiate a divorce—she could. But her husband was free to refuse it, whereas the woman had no choice but to accept the consequences of dismissal from her home. The possibility of being left destitute put women in an extremely precarious position, while their husbands had the security of being able to do what they wanted. Such is the nature of patriarchy.

So, whether it was the question of the legitimacy of Herod’s marriage or the validity of the Law of Moses or a combination, the Pharisees put Jesus in a tricky spot. But interestingly he responds by diverting the line of questioning away from that of divorce instead toward that of marriage. He says that the only reason the Law of Moses in Deuteronomy allows for the certificate of dismissal is because of “your hardness of heart”. In other words, God’s intention was for two people to be in a faithful, respectful, mutually loving relationship, period.  One flesh. But since people, fallible creatures that they were, kept screwing that up, the Law of Moses allowed a way for the relationship to be dissolved if necessary. And then, as it turned out, people had even managed to mess that up by skewing the divorce arrangement in favor of the man. So Jesus sought to get back to the basics, that is, what marriage was about in the first place; that two become as one.

I’d like to digress just a bit here because, like the word, ‘divorce’, the statement from Genesis 2 that Jesus cites– ‘God made them male and female…’– is a potential red herring; a distraction from the main issue. In order to avoid the trap of seeing this as an argument against gay marriage, you have got to remember one simple thing: This is not what this passage is about. The question to Jesus is about divorce. Divorce is about marriage. Marriage at that time was seen a legal arrangement between families of men and women to achieve financial security and a prosperous legacy. Jesus’ point in citing Genesis was not to promote heterosexual unions but to make a statement about a relationship between two human beings; a relationship intended from the beginning to be a mirror image of God and of God’s loving care for Creation.

For Jesus, a marriage relationship was not just a legal arrangement; it was a covenant relationship of mutual generosity, wholeness and healing.

For Jesus, this Kingdom view of marriage is a template of what God desires for couples when they marry.  But we have to acknowledge the fact that the Kingdom that is not yet still needs to allow for human brokenness. Sometimes relationships cannot be saved. Sometimes they need to end in order to ensure the well-being, dignity, and healing of everyone involved, especially those left most vulnerable.

Jesus simply acknowledged this need by leveling the playing field when he said that not just women, but men too were held to the standard of not being allowed to divorce in order to marry another. It may seem a small thing to us now, but it was a sea change for married women. For Jesus, the inbreaking Kingdom offered a measure of fairness toward the most vulnerable that had been missing.

That is what the Dream of God is about: raising up the downtrodden and cherishing those who are the most invisible and the most silenced. And here we find the thread that connects the first part of this passage to the second.  For Jesus, this entire encounter was so much broader than the mere fine points of Mosaic Law. The Kingdom is first and foremost about relationship. How do we see God? How do we see one another? What do we honor in one another? Perhaps more to the point, where do we fall short? 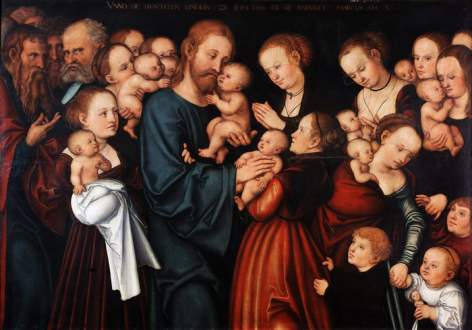 People were bringing little children to him in order that he might touch them; and the disciples spoke sternly to them… And he took them up in his arms, laid his hands on them, and blessed them.

If you’ve been following the lectionary, this is the second episode in the past three weeks, and the second time in the space of chapters 9 and 10 of Mark’s Gospel, in which Jesus takes children in his arms. And it is the third consecutive week that your clergy have stood in this pulpit and spoken about the vulnerability of women and children in society.  When the Gospel repeats something, and when it calls preachers to say pretty much the same thing for three weeks in a row, that means someone is trying to get our attention.

Notice that when Jesus focuses his audience on children, he doesn’t do it through his usual teaching medium: Parables. With the exception of the Prodigal Son, which is about grown children, Jesus does not offer parables about children. Why? Might it be because, as good as parables are for illustrating a point, showing is always better than telling? Nothing communicates God’s love for children more effectively than the image of Jesus holding a wee one in his arms and offering a blessing. So if Jesus is offering us something even more vivid than his parables, he is trying to get our attention.

To honor children in the way that Jesus does here was as radical as offering women more of a voice in marriage. Children in first century Palestine were of no account until they were old enough to pull their own weight, at which point they were pretty much seen as miniature adults. What Jesus does here is revolutionary—something that doesn’t actually get fully acknowledged in western society until the 19th century—and it’s this: Jesus treats a child as something special.  Jesus actually looks at children developmentally. He sees childhood as a distinctive and valuable part of life—an aspect of human development that can teach us something in particular, which is that those who are most fresh from God offer us a glimpse of our true calling as creatures of the Kingdom.

When he looks at the children Jesus sees trust, honesty, generosity, and wonder.

God is calling us to open our eyes once again, to remember who and whose we are; to see the world through the eyes of the One who came to us as a vulnerable infant.