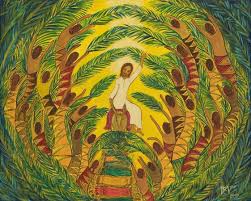 He had come to celebrate the Passover. Having traveled from Bethany, Jesus entered Jerusalem through one of its eastern gates to wild acclaim from the crowds that greeted him. They stripped the fronds from the palm trees and lay them as a carpet before him as he entered the city gates.

Present day actions often echo memories of the past. The waving of palms was a gesture that not only tells us something of popular expectations for Jesus, but is also an echo of collective memory. Some 160 years before, the triumphant Judas Maccabeus, the last leader of a successful Jewish rebellion against foreign domination, led his victorious partisans into the Temple, bearing palm branches they cleansed and rededicated the sanctuary after its defilement by the Syrian tyrant, Antiochus Epiphanies.

The waving of palm branches tells us something of the crowd’s expectations of Jesus as another national liberator, who in the mold of Judas Maccabeus has come to free them from the hated Roman occupation?

At the same time as Jesus was entering from the East, another triumphal entry procession wound its way into the city from the West. The Roman Procurator, Pontius Pilate, at the head of his Roman Legion had also come up to Jerusalem for the Passover.

Pilate did not live in Jerusalem. He chose to avoid the city’s ancient warrens seething with civil and religious discontent. Pilate and his Roman administration preferred the sea breezes and Mar A Largo conveniences of Herod the Great’s former capital at Caesarea Maritima; now the administrative center of the Roman occupation of Judea.

Pilate hated and feared the crowds of Jerusalem. He feared them most during the Passover which required him to come up to the city with a show of preemptive force in order to forestall the potential for insurrection. For Passover was the collective memory of liberation from an earlier period of slavery. Pilate’s arrival was indeed a wise move, for the crowds that hailed Jesus, were in insurrection mood.

Holy Week commemorates the events beginning on Palm Sunday of Jesus’ last week in Jerusalem before the Passover. Three narratives or storylines intersect and clash with an alarming result as Pilate, the crowds, and Jesus all become caught up in an escalation of events none could control.

Events take an unexpected turn and rapidly spiral out of control, culminating on the eve of the Passover (Maundy Thursday) when Jesus celebrates the Passover meal with his disciples. During this last supper, Jesus graphically demonstrates God’s vision for the world. He turns hierarchy on its head and washes his disciples feet. He takes bread and wine and associates them with his body and blood. He ends the meal with a simple mandate – in Latin mandatum from which we get the Middle English name maundy meaning commandment: love one another as I have loved you. But love has consequences: arrest, show trial, and crucifixion.

Holy Week is the week during which we accompany Jesus on the way of his passion. For some of us, this can be an intensely personal experience as our own experiences of loss and suffering – our passion surfaces in identification with that of Jesus’. For most of us, however, the nature of our Holy Week experience is less personal and more communal. We journey with Jesus as part of a community that journeys to the cross bearing within us not only our individual maladies and sufferings but the maladies and sufferings of the world around us.

Liturgy is a form of dramatic reenactment that transports a community through sacred time to where we move beyond memory, becoming participants in the timeless events that engulf Jesus.

In sacred time we become participants with Jesus – as if we too are part of his band of disciples during this eventful last week: