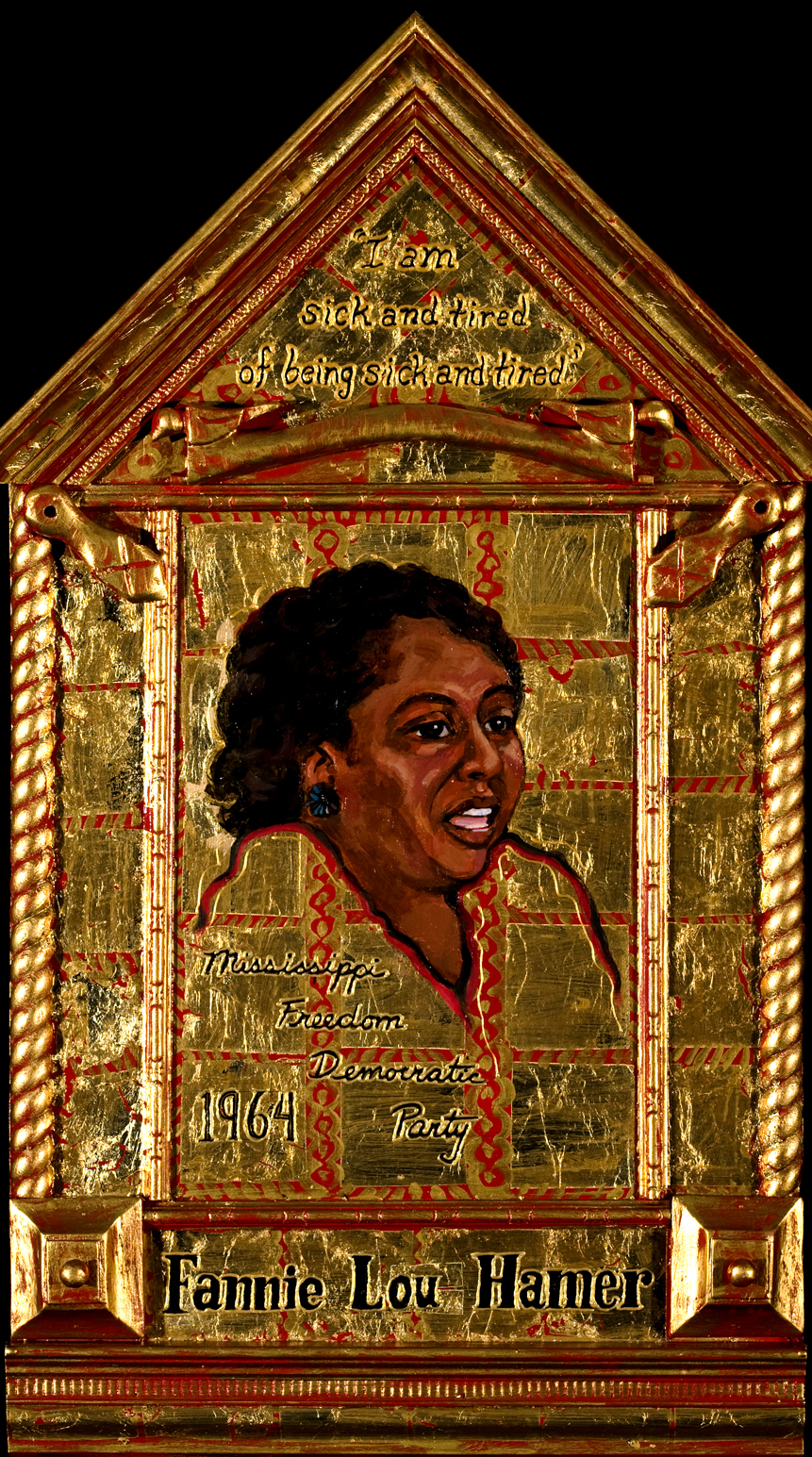 A sermon from Linda Mackie Griggs

It’s sad that I almost forgot about a woman named Fannie Lou Hamer. The daughter of Mississippi sharecroppers, she was a community organizer and civil rights, voting rights, and women’s rights activist who was poll-taxed, literacy-tested, censored, arrested and mercilessly beaten in her struggle for justice and equality in the 1960’s and early 70’s. In her speech at the founding of the Women’s Political Caucus in 1971 she made the declaration that you just heard.

“The changes that we have to have in this country are going to be for the liberation of all people—because nobody’s free until everybody’s free.”

Hamer was outshone by other bright figures in the movement—M.L. King, Rosa Parks, Medgar Evers, Gloria Steinem and Shirley Chisholm, but her courage and persistence in the face of so many obstacles deserves more than a footnote in history.

That’s why it’s sad that I almost forgot her. Growing up in (barely) post-Jim Crow Virginia I didn’t hear much about her—certainly not in school–so I suppose it’s understandable. Threats to the racial status quo were rarely part of the standard school curriculum in my part of the country. But those of us who didn’t learn enough about Fannie Lou Hamer missed out. And since she has shown up on my radar twice now in the past few weeks, I’m taking the opportunity to see what she still has to say.

Today’s lesson from Acts is all about freedom and becoming free. It’s also about what still enslaves us.

The Acts of the Apostles, or Acts, is a sequel to the Gospel of Luke, written by the same author. Luke’s Gospel ends, and Acts begins, with the same event; the Ascension of Jesus into glory at God’s right hand, which we celebrated this past Thursday evening, marking 40 days after the Resurrection. This period we are now in—the ten days from Ascension to Pentecost next Sunday, marks the birthing of the Church. Acts chronicles the first steps of the Body of Christ as the growing communities wrestled with what it meant to be a follower of Jesus.

It isn’t called “Acts” for nothing. It is one adventure after another as Paul, Peter, Silas, Timothy and the gang encounter mobs and demons, shipwrecks and assassination plots, miraculous healings and impossible escapes as they make their way around the Mediterranean world spreading the Good News and expanding the Church by leaps and bounds.

It is exciting and fun to read, but there is more to the story than action, drama, and the occasional earthquake ex machina. Today’s passage is about encounters with various kinds of enslavement: Paul, Silas, and their companions arrive in Philippi, a colony that is under Roman political domination. They encounter a woman possessed both by master and spirit. The apostles are imprisoned and tortured for threatening to upend the cultural and political status quo. The shackles aren’t just in the inner chamber of the dungeon—they are everywhere in this story—political, cultural, economic, and spiritual.  This story is about how the bound became free; but not all of them. It’s about whether, at the end of the tale, we will not only celebrate those who have been liberated, but remember that one has been left behind.

…as we were going to the place of prayer, we met a slave girl who had a spirit of divination and brought her owners a great deal of money by fortune-telling.

Paul being quoted by Luke

This is a woman twice-bound: possessed both by a spirit and by her owners, for whom she is a source of income. As she hounds Paul for days, identifying him to everyone as a follower of Jesus, we wonder what is wrong with her message. Is she not speaking the truth that the missionaries serve God and proclaim the Good News? Yes, but the context is important. The word Luke uses for the spirit of divination is very specific—pneuma puthonos, or spirit of Python. Python is the mythological snake, slain by Apollo, which once guarded the Oracle at Delphi. So when Paul, finally fed up by being badgered by this spirit, orders it to leave the woman, he is exerting power, not over a demon, but over a vital cultural norm of the Roman community; the worship of pagan gods. Anti-Jewish sentiment was already powerful in the colony, and what Paul has done is a major insult.

So the woman is freed from the spirit, but remains bound to her masters, who now see her as useless to them, and for this they publicly blame Paul and his friends:

These men are disturbing our city; they are Jews and are advocating customs that are not lawful for us as Romans to adopt or observe.

Christians were perceived by Romans to be a threat to the order and organization that made their civilization—the Pax Romana—possible and successful. Obedience and conformity to societal norms were hallmarks of the Roman way of life, and these upstart Christian Jews, who worshiped just one God, refused to pay allegiance to the emperor, and whose worship included cannibalism (body and blood, really?) were not to be tolerated.

One of the characteristics of Empire is its need to preserve itself, often regardless of the cost. And thus the brutal treatment of Paul and his friends is accepted as justified. But the jailer arguably shows himself to be as much victim as perpetrator in this situation. Imagine knowing that your only choice in the face of disaster is to kill yourself: Is he not as bound by the Empire as are his captives? So in the aftermath of the earthquake and in the presence of God’s mercy, is he not also freed? He is free to feed the hungry prisoners and to bind up their wounds. And he is freed to spread the Good News to others, adding to the growing tally of baptized believers.

Richard Rohr would describe the liberation of the jailer in terms of transformation through the Spirit: transforming the jailer from being a hurt person hurting people into being a wounded healer healing people. Because God’s liberation is not just the liberation of the oppressed. It is the liberation of the oppressor. The freedom into which most of the people in this story emerge is not a freedom to do whatever they want. It is the freedom to follow God’s call to serve and proclaim, free of the shackles of fear of difference and unrealistic expectations in others and ourselves; freedom to be vulnerable and to serve with joy. It is freedom from the need to commodify our relationships–of objectifying others as a means to our own ends, and instead being freed to relate to everyone as the beloved children of God that they are.

And this story calls us to do something else. Something we almost forgot.

Remember the slave girl? Remember that, freed of the spirit of divination, she is no longer of monetary value to her masters. She is now silent; she hasn’t said a word since Paul’s exorcism. She is the one person in this story for whom freedom is not complete.  The potential future scenarios for a woman no longer of worth or profitable use in the first century Roman world are not pleasant to contemplate. Her fate is a lingering question, a part of the story that remains unwritten. What are we to make of it?

Let her silence speak to us. Let it speak for all those in every age who remain economically culturally, politically, or spiritually imprisoned or enslaved. Let this silent nameless woman speak for them.