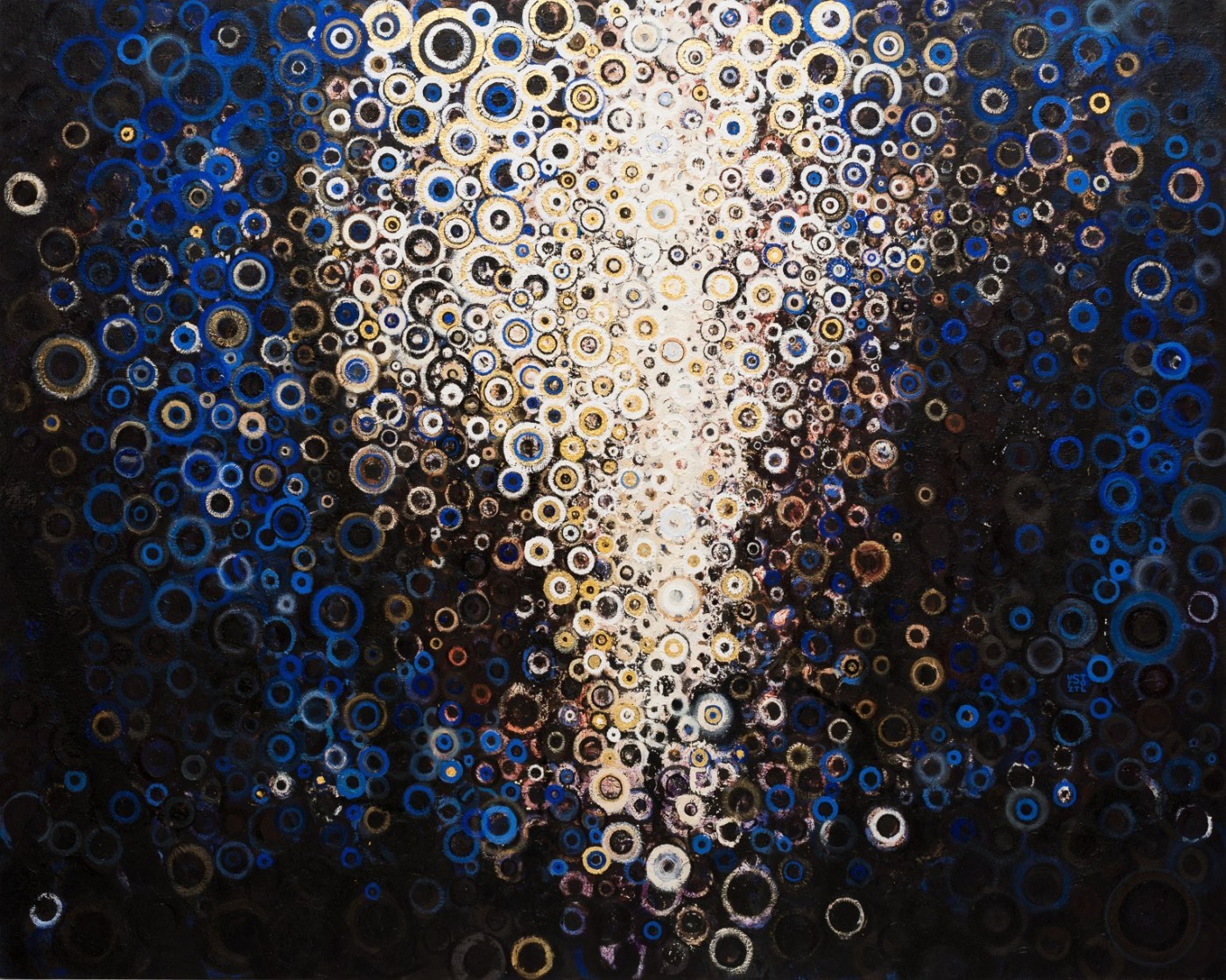 Jesus was praying in a certain place, and after he had finished, one of his disciples said to him, “Lord, teach us to pray, as John taught his disciples.”

Jesus was a man of prayer. He was a good Jew, so this shouldn’t be a surprise.

But in Luke’s Gospel we see how prayer informed his life. After Jesus’ baptism he prayed, and the Holy Spirit descended upon him. As word of his ministry spread and he was in greater and greater demand as teacher and healer, he would withdraw to pray. He spent the night in prayer before choosing his disciples. He prayed as he was transfigured on the mountain. He prayed in the Garden of Gethsemane. He prayed as he died, offering his spirit back to God. Prayer was a crucial part of his identity.

His disciples understood this when they made their request. Perhaps more important, they also understood that a community’s identity is tied to its prayer life; “…teach us to pray as John taught his disciples…” In the Acts of the Apostles Luke tells us of the identifying marks of the new community of the Way of Jesus: “They devoted themselves to the Apostles’ teaching and fellowship, to the breaking of bread and to prayer.”

Sound familiar? Like our Baptismal Covenant? “Will you continue in the Apostles’ teaching and fellowship, in the breaking of bread and in the prayers?”

Praying identifies the people of the Way of Jesus.

Who taught you to pray? Who has taught you about praying for others or for yourself? Did your parents teach you grace before meals or bedtime prayers? Or did you simply observe people in church as they lit a candle, or knelt quietly before services? Have you explored contemplative prayer, fighting off the thousand monkeys in your brain as you tried to breathe into a state of calm presence? Or have you been a student of spontaneous prayer as the moment demands—the school of what Anne Lamott calls, “Help, Thanks, Wow, Oops”?

Prayer is a way of petitioning, interceding, praising, confessing, even whining (yes, just check out the psalms) to God. It is also how we listen to God. We can learn to pray in many ways, varying according to our circumstances and our time of life. And how we learn prayer, much like how we learn anything, connects back to who we learned from.

Which is why today’s passage is especially significant. Both Luke and Matthew include a version of the Lord’s Prayer in their Gospels. Luke portrays Jesus in a somewhat private conversation with his disciples, while Matthew sets Jesus’ teaching  in the context of the Sermon on the Mount before a large crowd of people. But the most important thing to understand in either episode is the fact that, here, Jesus is the teacher. So what we learn about prayer in this particular passage is in a specific context: the life, ministry and identity of Jesus.

The Latin phrase, “Lex orandi, lex credendi” is roughly translated, “praying shapes believing.” The way in which we pray informs our faith and how we live it out in the world. But the reverse is also true: that what we believe tells us a lot about how and what we pray. So when Jesus teaches us this particular prayer, he is showing us what we believe in: A God who is above every earthly power, yet relational and tender. Whose transcendent name is above every name.  A God whose Dream of justice and righteousness for Creation extends deeply into it, promising ultimately to become fully joined with it. A God who feeds, provides and nurtures. Who forgives. Who watches over us in times of trial and testing.

This prayer isn’t just a list of requests. It’s a portrait of the Holy One. Jesus offers us a prayer that reflects and shapes what we believe about God.

The Lord’s Prayer is a window into the God to whom we pray. It is also a window on who we are as pray-ers. We are people who seek a God who knows us intimately. We seek a God who calls us to righteousness and healing of relationships, and who challenges us to be part of the inbreaking Kingdom–God’s Dream. We are hungry, vulnerable, seeking, yearning and anxious. We need the God who knows these things about us.

Thus Jesus offers us, in these few lines–this simple prayer, an entwining image of the loving gaze between parent and child; Creator and created in mutual love, each as giver and receiver.

It is with this vision in mind that we need to view the parables that follow it. But first, let’s return to the beginning and remember our context. Jesus is approached by a group of disciples who ask him to teach them to pray as John taught his disciples. So this is not about individual prayer, though entering into prayer on a personal level is absolutely a vital part of the spiritual life. That’s another sermon, or two… But this is different—Jesus is teaching about the prayer of the community of the faithful.

Jesus, teach us to pray. Teach God’s people to pray.

There are often two temptations with the parables that follow the verses concerning the Lord’s Prayer. One is to ignore them entirely and focus on just the first part of the passage. But that robs it as a whole of much of its power. The other temptation is to interpret the parables about seeking, asking, knocking and persistence (also translated as shamelessness)–to interpret them as transactional –to see it as meaning that as long as we ask, seek, or knock, and keep doing it until we’re blue in the face, that God will give us whatever it is we seek, ask, or knock for. Down that very slippery slope, friends, lies the prosperity gospel—the myth that as long as we do everything right God will shower us with material bounty. That path is strewn with a whole load of cynicism and disillusionment. Because life tells us that the efficacy of prayer—how it actually ‘works’, for us and within us—is often mysterious and unpredictable. Simply put, God doesn’t follow instructions, and this teaching of Jesus is not telling us any different from that. But even in the face of the great mystery of prayer we are called to do it, and not to give up.

But to what end then?

Everything in this passage about seeking, asking, and knocking can be seen in the context of three things, two of which I’ve already mentioned. First, the prayer that Jesus is teaching is the prayer of the people of God, not individuals. Second, the God to whom we pray in the Lord’s Prayer is the God whose Kingdom we invoke—the Reign of God, to ultimately come to earth, making a new reconciled Creation: In Matthew it says, “Thy will be done on earth as in Heaven.” Third, the most specifically stated gift mentioned in this entire passage is that of the Holy Spirit.

“If you, then, who are evil, know how to give good gifts to your children, how much more will the heavenly Father give the Holy Spirit to those who ask him!”

The people of God are challenged and called to be a community who seeks, asks, and knocks shamelessly for the inbreaking Dream of God. We are called to feed as we are fed, to forgive as we are forgiven, to protect the tried and tested as we have been protected. We are called to the healing of the world by a loving God who knows that we can’t do it by ourselves.

Biblical storyteller Richard Swanson observes that the Spirit, or what he calls Holy Breath, is part of both Creation and Resurrection. Holy Breath brooded over chaos in the beginning and breathed life into the first human. Holy Breath came to Jesus in the tomb, breathing rebirthed hope into Creation. Our every inhalation is a gift from God, and our every exhalation is a sharing of that gift. And with that gift, Swanson says, we have “…the responsibility to breathe hope back into people and communities and systems, even after they have given up.”

It is gift of the Holy Spirit, that intercedes with sighs too deep for words, whose wisdom guides us, and that spurs us as the people of God to see in every face the face of the One who calls us to ask, seek, knock, and never give up on the work of the Kingdom. It is the Holy Spirit that equips us—us– to be the answer to God’s prayer. Amen.