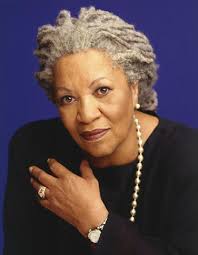 Last Tuesday we celebrated the Transfiguration of Jesus which is the turning point at the heart of the gospel story. The truth of Jesus’ inner identity is revealed before he turns his face towards the road to Jerusalem. In the Greek used by the gospel writers metamorphos is the word used for the transfiguration experience. Metamorphoses describes the experience when the inside meaning and truth of Jesus identity, i.e. his divinity is revealed in the outer appearance of his humanity. The inside and the outside become one.

How does the inside match the outside? What is real and what is mere appearance? This is Plato’s central question. It is also ours as well.

The great African-American novelist Toni Morrison died this last week. With her death we witness the passing of a prophet. Again we will find that prophets are more honored after their death than during their lifetime.

We could think of Morrison as a prophet because in her writing she revealed the tensions between inner truth, i.e. the way things really are or at least need to be, and the easy acceptance of the distorted appearance of things.

The first reading for this Sunday opens with Isaiah’s vision concerning Judah and Jerusalem in the days of Uzziah, Jotham, Ahaz, and Hezekiah, kings of Judah. Through the mouth of the prophet, God declares:

I have had enough of your ritual sacrifices and solemn assemblies. Instead remove the evil from your actions from before my eyes by learning to do good, seek justice, rescue the oppressed, defend the orphan, plead for the widow.

Stan Mast in his commentary on this Isaiah passage interestingly quotes from James Limburg who noted paradoxically that:

Jerusalem just past mid-eighth century BC was a place where the economy was booming, the elite were basking in the prosperity of the Uzziah years, and ecclesiastical institutions were buzzing with sacrifices and songs.  But beneath it all, something was wrong.  A terrible sickness was eating away at the heart of the nation. Isaiah had seen it and tried to warn his people before it was too late.

The terrible sickness that belied the appearance of prosperity in mid-eight-century Judah included a reckless adventurism in foreign affairs, the greed of the powerful, the corruption of justice, all typical characteristics of a society of haves and have nots. However, the core of the sickness lay in the willingness of the population to be distracted by a glittering but false narrative of prosperity and security. This false narrative distracted the people from immanent national disaster and the erosion of the shared common values ensured by the Mosaic Law, Israel’s ancient constitution. The external narrative creating a false and distorted appearance of things functioned only as a distraction from the inner meaning of the truth of the terrible communal and political sickness eating away from within Isaiah’s society.

Toni Morrison wrote to expose the terrible sickness at the heart of American society; the inner truth and meaning of the sickness of racism belied by the appearance of things. She noted:

We live in a culture that has become easily and alarmingly distracted by a series of false narratives, perhaps the one with the greatest long-term impact being climate change denial. The economic measurement known as GDP is another false narrative that functions as a distraction from real experience. How can the economy be flourishing when the experience of our well-being languishes? The answer lies in what you choose to measure, and what you exclude from measurement.

We can become familiar with the distorted rhetoric of narratives that distract us from the inner reality with glossy versions of the external appearance of things. God’s message to Judah in the time of the Isaiah is the same as God’s message to 21st century America, delivered as then, so now, through the mouth of modern day prophets such as Morrison:

In her 1975 novel Beloved Morrison wrote that freeing yourself was one thing. Claiming ownership of that freed self was another.

Being open to the stirring of the Holy Spirit within us, speaking to us both individually and in community, is for Christians the key to discerning what is authentic and healthy, true and good, from the false and distorted distractions of external appearances. Through the power of the Spirit we claim ownership of our freed selves.

How do we cultivate our listening to the promptings of the Spirit guiding us amidst the cacophony of competing messages? The simple answer is to return and rest in the formative language of the biblical story.

Receiving the Nobel prize for Literature in 1993, Toni Morrison said:

Do not be afraid, little flock, for it is your Father’s good pleasure to give you the kingdom. Sell your possessions and give alms.

For where your treasure is, there your heart will also be.

The inner and outer realities metamorphose – come to resemble each other when we hear the inner promptings of the Spirit speaking to us through the biblical narrative; giving us the language for naming what Morrison called the scary things which otherwise continue to have no names.

In the face of distortions and lies couched in sometimes glossy, sometimes fear inducing narratives of distraction – like Toni Morrison, and most of all like Jesus – we speak the inconvenient truth – so that the words we speak, and the priorities of our hearts will become the measure of our lives?