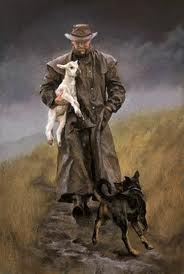 Luke records two of Jesus parables in the first 10 verses of chapter 15. To anyone who has ever lost or misplaced a cherished object, or heaven forbid, lost a pet these two stories are immediately familiar. We can readily identify with the panic of the shepherd who is willing to leave the 99 in search of the missing one. We have all been the woman who ransacks her house in search of the lost coin; her mind completely fixated on finding the lost coin to the extent that nothing else matters – no food prep or cooking is done, no laundry is washed, the kids are not even picked up from school. We all know how great her relief is when she finds her lost coin. Yet, do we share her gratitude that finds expression in an exuberant celebration of generosity showered upon neighbor and stranger alike? Perhaps not.

It’s so like Luke to pair a story about a male shepherd with one about a female housewife. For Luke the kingdom of God is a place of complete gender equality.

As we ate and looked, almost spellbound, the silent hillsides around us were in a moment filled with sounds and life. The shepherds led their flocks forth from the gates of the city. They were in full view and we watched and listened to them with no little interest. Thousands of sheep and goats were there in dense, confused masses. The shepherds stood together until all came out. Then they separated, each shepherd taking a different path, and uttering, as he advanced, a shrill, peculiar call. The sheep heard them. At first the masses swayed and moved as if shaken with some internal convulsion; then points struck out in the direction taken by the shepherds; these became longer and longer, until the confused masses were resolved into long, living streams, flowing after their leaders. Such a sight was not new to me, still it had lost none of its interest. It was, perhaps, one of the most vivid illustrations which human eyes could witness of that beautiful discourse of our Savior recorded.

The parable is a form of ancient storytelling – its content instantly recognizable from the everyday lives of the story’s hearers. But while the storyline is familiar from experience, it’s the unexpected twist at the end of the story that leaves the hearers wondering what just hit them. Jesus’ parable of the lost sheep is like all of Jesus’ parable stories – a familiar story from pastoral life that unexpectedly confronts the hearer.

Luke identifies two distinct groupings: Pharisees and scribes, and tax collectors and sinners. If this story is an allegory of our relationship with God, what is the takeaway? For me, the takeaway lies in discovering in which of the two groups I find myself reflected?

Pharisees, Scribes, tax collectors and sinners all are historical reference points in Luke’s world that enable him to sketch the picture of Jesus against a background of conflicting worldviews. I wonder between Luke’s time and ours, has anything really changed much? The names change, but the dynamic of conflicting worldviews stays the same – a conflict at its essence between those who have and those who have not. Yet the deeper question in much of Jesus teaching is – what constitutes having and not having? The answer is not always obvious.

The Pharisees are smug and self-satisfied. They thank God that they are not made as these contemptible others are. They feel confident in a system that makes them the authors of their own salvation. Here’s the rub. Like them, do we not feel we are the authors of our own salvation? We have the power and privilege of being in control of our lives. We are pretty satisfied that we are right with God, or more arcuately, isn’t it that God is right with us? Privilege blinds the complacent.

The Scribes are certainly censorious. Cocooned in a world of religious privilege that insulates them from the necessity of risk-taking. Their legalistic piety leads them into judgement of others. Aren’t we too pretty good at that. But wait a minute, on closer examination, if only we took our spiritual lives as seriously as the Scribes did theirs. Oh, that we cared as much as they did about being right with God and being faithful and regular in our daily and weekly religious observance. Unlike them, privilege breeds in us a worrisome lack or spiritual urgency.

The tax collectors are a wiley bunch. They benefit quite nicely from the fruits of economic and social injustice. They may earn the contempt of their fellow Jews, but sandwiched as the middlemen between their fellow countrymen and the Roman occupation they turn a nice profit. Are we not among the winners in our capitalist system, a system that is fundamentally exploitative? Perhaps its this lack of identification with the tax collectors that lies at the root of our reluctance to understand the need for root and branch change?

And then there are the sinners. Sinner is a technical term for Luke. Sinners does not mean bad people in the sense that we might use the term to describe the morally compromised. Sinners are those who live precarious and risk filled lives on the margins, shut out from both the religious and economic systems. It’s not likely that transported into Luke’s 1st-century scene, we would identify ourselves with those whose poverty grinds them down and puts lives luxuriating in self-satisfaction and respectable guilt far beyond their reach.

We’re probably way too proud to think of ourselves as lost sheep. But the image seems to fit. For have certainly wandered off so that to be found requires God to go in search for us. The problem is that even when God finds us we don’t think we need to be found, because we can manage our own state of affairs, thank you God.

The comfortable have no need of God. Those humbled by worldly circumstances know only their need of God. Now we come to the heart of the difference between Pharisees and Scribes on the one side and tax collectors and sinners on the other. One group stands a little apart in a stance of the self-righteous; judging Jesus because he does not conform to their rules. The other group crowds in upon him — hungrily feeding on the image of a God willing to take considerable risks to go in search of his lost sheep. For those on the outside; those who are considered nothing because they have nothing, Jesus words have powerful effect and their longing is palpable. Longing to be found is also a metaphor for longing to be changed.