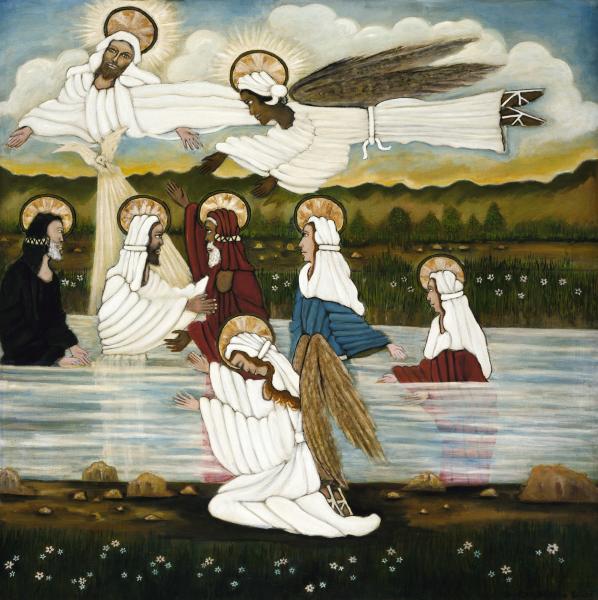 I refer to stories in the plural because while we really only have one life story, nevertheless, we can tell it in lots of different ways. Depending on life stage and context our story changes as we hash and rehash elements in our history – some remembered, some misremembered, others suppressed and seemingly forgotten.

Our experience of living in the expanse of time and space is structured around the stories we tell because it’s through story that the world around us is given shape with meaning and purpose. The question we need to ask about the stories we tell – and story more generally – is not are they true or false but are they thick or thin stories? Thick stories are made up of an interweaving of multiple strands – weaving a rich technicolored picture of experience that fosters human flourishing. Thin stories by contrast weave a threadbare monochrome picture – a picture of experience that is too small for our needs – often too fear driven – confining us and stifling our ability to thrive.

It’s the thickness or the quality and complexity of stories that matters!

On Wednesday of this week, we reached a turning point – a pivotal juncture in the current cycle of a resurgent very thin story in our national life. This is a story of domination, not of flourishing. It’s a story driven by fear – a story in which the thin strands of misremembered nostalgia are woven together to form a fearful story in which domination is empowered and maintained through violence, fear is stoked by conspiracy. This is not a new story for America. It’s a recurring one – periodically resurfacing during times of change as a conduit for the repressed paranoia in our collective national consciousness.

America is not exceptional in this regard. As Robert Willis, Dean of Canterbury reminded us in his message of solidarity with the American people – many nations also have sorry experience of similar thin national stories resurfacing from time to time.

This week we saw the final showdown – at least in its current cycle of resurgence – between a thin rendition of our national story and the thick and abiding story of the Constitution. Many of us over the last four years had come to wonder whether when the final showdown came – as we knew it must – the thick story of national identity given to us by the Constitution would prevail in the face of the paranoid imbued strands of a thin story of domination and oppression –supported by the violence inherent in all forms of despotism. And to our relief we discovered – yet again – that thick stories eventually prevail – because they show us a more fruitful way for the remembrance of our past to become our future reshaped.

In 1792, The father of the nation, George Washington, delivered these words in his farewell address to Congress.

We catch more than a glimpse in Washington’s words of the motivating story behind them. The Constitution – like the Bible is often mischaracterized as simply a document. In reality – like that Bible – the Constitution is the transcription of a thick story giving shape and substance to a picture of a people constituted as a republic of citizens empowered to elect their own government according to the guiding principles of a foundational story.

Between our thick and thin national stories, it may often seem the contest is a close-run thing. This week we once again witnessed how the thickness of our founding story preserved a picture of national life characterized by equality in diversity against the attacks of an increasingly undisguised thin alternative.

I’ve noted the events of this past week to demonstrate how stories operate at our national level and how crucial it is which stories we give allegiance to. Choice is everything.

The Christian Kalendar plays havoc with the chronology of time – moving from infancy to adulthood in a matter of weeks. Today we celebrate the story of Jesus’ baptism – a story reported by all three of the synoptic gospel writers. Yet, whereas Matthew and Luke begin their gospels with the story of Jesus birth, Mark begins with Jesus– seemingly out of the mists of childhood and adolescence striding onto center stage as a fully grown man – a man who has come to begin the active phase of God’s purpose for him.

By beginning with his baptism, Mark offers us a different story lens through which to view Jesus. Mark’s Jesus is not born into divine sonship, he is chosen through adoption into his identity of divine son – although Mark, writing earlier than the other gospel writers sticks more faithfully to the Jewish messianic title Son of Man.

Likewise, we tell our own individual stories differently influenced by time and context. We can emphasis our identity through birth, and for some – such as members of dynastic families, privileged classes or elites, the birth story is the primary source bestowing identity. Yet for most of us identity is shaped less by birth and more by adoption. We become ourselves through multiple experiences of adoption; each adoption experience shaping the persons we have been destined to become.

The human Jesus at his baptism is adopted by God as the divine son. The story of this event conjures images of a dramatic tearing open of the heavens as the Holy Spirit – the divine breath of God breathes into Jesus – loudly proclaiming his sonship – an action that echoes image given us in the first reading from Genesis where the wind-breath of God swept over the face of the waters.

The story of the Constitution is the foundational story of our nation. The baptism of Jesus is in a very special way our foundational story as Christians. As he was adopted by baptism into his inheritance as the divine son, so through him we too have been adopted by baptism as daughters and sons of God. As God chose and embraced Jesus, so through our baptism God chooses and embraces us as divine children. And like Jesus, we bring God pleasure. As the breath of God enters into us, we become renewed and empowered as Jesus was – to fulfil the purpose God calls us to.

Stories articulate the core themes of identity. This past week’s political drama represents the struggle over which story will we allow to define our identity as a nation – which story will we draw upon to tell us who we are. Through the story to which we give our ultimate allegiance, we rediscover and reconfirm that identity over and over again in response to new as well as some very old challenges. There are times, as this past week has revealed to us, when the outcome of competing and at times clashing stories within us can be a close-run thing.