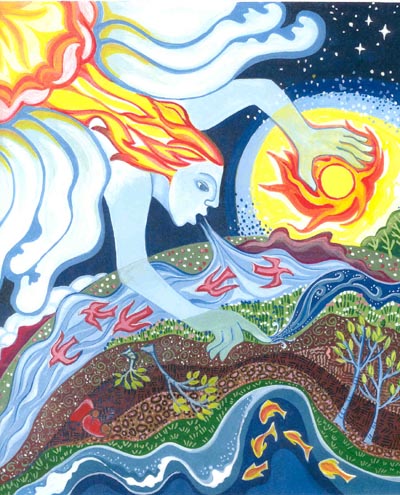 The book of Proverbs belongs to a genre of Biblical writing known as the Wisdom Literature. Proverbs belongs with Psalms, Ecclesiastes, Song of Songs (Song of Solomon), Job, and Sirach or sometimes known as Ecclesiasticus.  Although adapted to Jewish issues and concerns Wisdom literature is not Hebrew in origin. Similar material is also found in Egyptian and Babylonian sources.

Wisdom focuses on the challenge to live life skillfully in a spirit of enquiry and wonder. In the face of suffering, Wisdom is unsatisfied by the conventional answer: because God wills it. Wisdom challenges suffering and the apparent futile and fleeting nature of life and says: yes, but why?

Wisdom presents a complex and multilayered worldview – sitting in tension with more conventional biblical voices. We see this tension playing out again and again throughout Proverbs, Psalms, Job, Ecclesiastes, and Sirach. Personified in the feminine – Wisdom expresses the feminine principle – the anima of the divine – later to find an echo in the Christian understanding of the Holy Spirit – the pneuma – the breath of God. The Greek term for Wisdom is sophia. Sophia, expressing creation’s feminine principle has been affectionately known in English literature as Lady Wisdom.

Proverbs 31, enumerating the qualities of the good wife appears to have been written as the inspired utterances of the Queen-Mother for her son, King Lemuel (identity unknown) in his search for the ideal spouse. Thus, the depiction of the capable wife found from verse 10 onwards is in its original context a description of the ideal virtues to be found in a great queen. It is definitely NOT a description of the virtues of ordinary wifeliness which the patriarchal tradition of Jewish and Christian interpretation has embraced.

Last week I stressed the importance of words. Words matter! This week I want to draw attention to two Hebrew words isshah and chayil.

English translators have for 500 years struggled with the Hebrew word Chayil – variously translating it as good, virtuous, valiant, or as the NRSV does – capable. Yet, all these translations miss chayil’s clearest meaning of warrior-like. There is quite a difference when verse 10 if instead of a capable wife, who can find we read a warrior-like – strong woman – who can find?  Wouldn’t this introduce a novel twist to The Handwife’s Tale let alone challenge Evangelical notions of male headship?

Proverbs 31 nowhere presents a picture of dutiful and obedient wifeliness. Neither does it in any place extol the virtues of motherhood. This woman is not chained to her stove or her children, she is not domestic at all but seems to be something of a combination of a wise and frugal merchant, creative artisan and provider, and social philanthropist. The text notes that her husband is well known at the city gates – who with a woman like this at his side – would not be?

When chayil is rendered warrior-like, strong, invincible, Amazon-like, as opposed to merely virtuous or capable, the exhausting list of this woman’s social and domestic productivity is only capped by her crowning glory – which resides not in her industriousness, neither in her physical beauty, nor her cocktail-hour social charm and wit. According to Wisdom, her crowning glory lies in her fear of the Lord – as in holding the Lord in proper esteem. Hence the saying: the fear of the Lord is the beginning of wisdom. Never mind her husband’s honor among his peers, Proverbs 31 concludes with:

In the 21st-century, this is a difficult text for the unwary preacher. It is a text that speaks to both the hopeful expectations as well as the enduring pain and struggle lying at the heart of contemporary issues of gender and power.

It’s extraordinary when considering that such a text, read for centuries as a patriarchal hymn to wifely virtue is one of the clearest biblical endorsements for what we have come to refer to as the emancipation of women. Such a reinterpretation rests on the strength of what the text says. Words Matter! Strip away Tradition’s male-dominated wifely fantasies and we are compelled to allow the text to speak anew into our own gender-contested context.

The emancipation of women and the emergence of the woman’s voice in our political and theological context constitutes not simply a new social awakening – but a return to the vision of womanhood in Proverbs 31. The emancipation of women in our own time is a veritable tsunami that continues to sweep before it centuries of women’s experience of injustice and oppression at the hands of both the female as well as the male supporters of patriarchy. Much of the energy of the anti-abortion movement is understandable only when the age-old patriarchal fear of women being in control of their own reproductive choices is factored in.

In its original context, Proverbs 31 constituted an idealized image of royal womanhood. Nevertheless, allowing for such idealization, the text expresses Wisdom’s image of womanhood not domesticated to the home and hearth but as strong, vital, and socially engaged in all aspects of civic life.

In Mark 9:30-37, we find Jesus sternly castigating his disciples for masculine preoccupation with power and dominance. His response comes straight from the heart of Wisdom’s playbook. In his day children were even more oppressed than women in the hierarchy of patriarchy. Driving home his point- he -takes a little child and in Wisdom’s voice proclaims:

whoever welcomes one such a child in my name, welcomes me; and not only me, but the one who has sent me!

In the wake of the tsunami of women’s emancipation, and the growing recognition of the rights of the child – we are awakening to a tidal wave of repentance for the way we have been deaf to the age-long cries of women and children. Open your ears – can you hear Wisdom is still speaking?