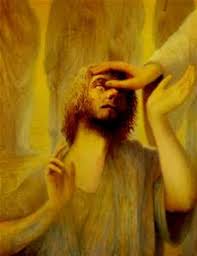 We have here a story of a man who has had a transforming encounter with Jesus; a man whose story of God’s love and compassion is so compelling that he can’t help but share it. A man whose story is the cause of curiosity, wonder, and consternation all at once. A man who was cast out by his community of fellowship. A man who knew Jesus’ presence with him even in a moment of rejection and vulnerability, and worshiped him.

That man was the writer of the Gospel of John. His community of Jewish Christians was expelled from their synagogue because of their belief in Jesus as Messiah and Son of God, and this painful rupture in all likelihood influenced this narrative of a man cast out because he refused to disavow Jesus as the source of his healing.

So we have a story within a story; both of them about communities in points of transition and how they respond to the prospect of change.

I’ve always loved this passage because of its energy; a kind of theatricality that catches the listener up in a swirl of question and accusation, a cast of thousands (sort of) and a back-and-forth dialogue worthy of The West Wing.

And at the quiet gravitational center of it all; a blind man and a Messiah. One thing I do know; that though I was blind, now I see. This statement is a simple narrative of transformation. The man, whose name is unknown, doesn’t need to embellish; he just speaks his truth while neighbors, Pharisees, and parents talk past him, flailing about for more answers than he can provide, nor does he care to, really. Perhaps he has enough to deal with as he negotiates his way in a world now flooded with light and color; a world in which the Dream of God has come intimately close. He is, through the application of dirt, spit, and water, a new creation.

So he asserts his new identity though the cost is high; he is expelled from his synagogue. And yet Jesus, who, you will note, is only actually in this drama at the beginning and at the end, though his presence is felt throughout—Jesus seeks the man out and reveals his own identity:

Do you believe in the Son of Man?” He answered, “And who is he, sir? Tell me, so that I may believe in him.” Jesus said to him, “You have seen him, and the one speaking with you is he.” He said, “Lord, I believe.

For the writer of John’s gospel, this was personal. The energetic images make real a moment of conversion and its initially chaotic aftermath. The perseverance of the man who has been healed, the confrontation with the community, the pain of rejection and the moment of worship are related by a storyteller who is deeply invested in what he is telling.

…I was blind, now I see. A simple statement of identities; an old one transformed into a new one. And the Gospel writer has incorporated it into Great Story: In the beginning was the Word, and the Word was with God, and the Word was God. The Great Story of God’s love for creation is woven of smaller stories like this, of encounters with the Word made flesh; a tapestry of God’s Dream unfolding before our eyes.

And what gives this tapestry its vividness and dimension is its authenticity. There is not only the joy of healing in this encounter with Jesus, there is also the spiritual blindness and deafness of a community, and the pain of rejection—human frailty and vulnerability on full display. And this is important because it is frailty that teaches us the most about ourselves and who we are called to be as children of God and disciples of Jesus.

Notice the interaction of the man who had been born blind and his interlocutors. Question after question are launched at him, but does anyone really seem to be listening? The Pharisees are focused on violation of the Sabbath and whether the healer was a sinner. The man’s parents, rather than being overjoyed at their son’s healing, would rather be anywhere than being questioned by the authorities on the unusual way in which the healing had occurred. The neighbors are curious, but they either talk about him rather than to him or they keep asking the same question over and over: How did this happen? Where’s the guy who did it? And he keeps telling his simple story: …I was blind, now I see.

It’s like a feedback loop that they can’t escape. See, the thing about stories is that they are a two-way street. We’ve talked a lot about Story here at St. Martin’s, in part because storytelling is the connective tissue of the Body of Christ. But we haven’t talked much about what is fundamental to making a story truly effective. It must have a teller, obviously. But it isn’t a story until it has a listener—someone to attend to it. And the quality of the listening is as crucial as the narrative itself because it is only then that we have meaning, within the community.

So at the end of the story, when Jesus talks about blindness, he’s also talking about deafness—whatever dulling of senses has come to insulate us from fully encountering the truth of another. “Surely we are not blind, are we?”, the people say to Jesus. Well, actually, yes, you are, he says. As long as your own agenda keeps you from seeing, hearing, truly knowing the fullness of what is in front of you, yes, you are blind. And your blindness and deafness are distorting the story that someone is trying to tell you; they are obscuring the signs of new life that he is trying to show you.

The first-century community of John’s Gospel and the 21st-centurymainline church both share the experiences of enormous change and transition. An encounter with something new and untested tends to raise the adrenalin level so that we perceive threat where there might just as easily be opportunity. And when that happens it is vital to resist the temptation to retreat into nostalgia—a kind of blindness–and instead stop, breathe, and attend to what is in front of us.

Let the teller tell the story

In our Lenten Program this year this is what we are doing. In the course of our dinner discussions we have the opportunity to tell stories about our journey of faith and to listen to each other. We are learning to articulate our faith in a way that is magnetic to others—attracting them to a community that seeks—and very much needs–to grow. And the corollary to the telling of each story is that we also learn to attend to it—to see the identity of the teller as beloved of God who can offer a story of his or her own. Because we are not just called to name and claim our own identity as followers of Jesus; we are called to see Jesus in others. And that carries with it the risk that comes from true listening; the risk of change.

To truly listen to someone is to be open to the possibility that what you hear will change you. As the community of the man born blind learned, that is a scary proposition.

If the neighbors, parents, and religious authorities in this story had set their anxious questions aside they might have glimpsed the Dream of God becoming manifest right in front of them. They thought they were listening, but they weren’t. What they were doing was listening in order to change someone, rather than taking the risk that the listening would change them.

Last Saturday I had a humbling experience. I was involved in the annual Diocesan Learn & Lead workshop, which this year tackled the topic of generational differences and what they mean for the church. As I look back on it, the committee’s biggest concern as we planned the day was to gain understanding of what we perceived as “that shy, elusive creature, the Millennial.” Our committee made a special effort to invite Millennials– young people born between 1982 and 1999 because we felt that it was important that we not be talking about them in their absence.

So instead we talked about them in their presence. We had made the mistake of not asking a member of the Millennial generation to lead the discussion of a video presentation. So instead of observing an informative back-and-forth dialogue between generations I watched in some consternation as Baby Boomers began to opine about Millennials in the third person even though seven of them (they were totally outnumbered) were sitting right there. The opinions about them swirled through the air for several minutes until one young woman was finally able to get to the microphone and say, If you would like to know more about us, we’d be delighted to tell you, if you would ask us. Thanks be to God this was greeted with widespread applause.

But it was during lunch that the real grace happened. As the rest of the conference attendees moved around them a couple of older folks and five of the young people took their sandwiches and sat in a circle on the floor. At that quiet gravitational center, the young folks talked. They talked about their frustration at being treated as the automatic go-to people for social networking and technology when their gifts, talents and interests are vastly more diverse than that. They talked about their frustration at being assumed to be too young to take things on when they are more than fully capable of developing and running successful programs; They told of their childhood experiences of church and faith; about their desire for community with their friends, and their desire to have their questions about spirituality and religion truly heard and not dismissed. As one person said with an ironic smile, If I may generalize about Millennials, we all hate being generalized.

And as the hour and the conversation went on, I noticed a number of people quietly gathering around the little group. This time, instead of opining, they listened. I think I was not the only one who felt humbled in the presence of the vulnerability and wisdom of these young people.

I was blind, but now I see. Now I could see, not generalized “Millennials”, but individual story tellers with names: Mike, and Christopher, and Patrick, and Kenny and Frank.

That’s all anyone really wants, isn’t it? Regardless of age and wherever we meet. To be truly seen; to be known as a child of God with both strengths and vulnerabilities. Our challenge as a community focused on Jesus—because that is, after all, what we are—is to be that quiet gravitational center for others—that place where they not only encounter Jesus, but where they show Jesus to us, so that we all may be transformed.